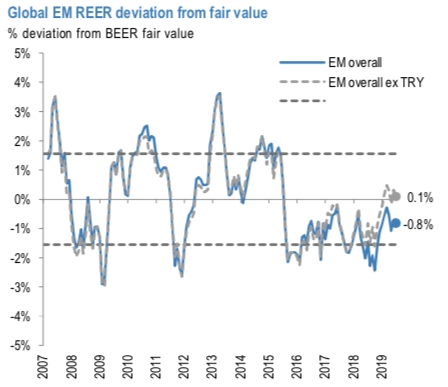 The US dollar index (DXY) has appreciated 0.5% to 97.4 on the weaknesses of its major components, despite widespread expectations of an imminent rate cut. US data flow has been highlighting the USD’s relative advantage over the euro, which accounts for 57.6% of the weight in the DXY.

The slowdown in EM retail bond flows is not too surprising given weakening return momentum.

Elsewhere, the prospect for sustained private capital outflows from CHF suffered a setback due to the protracted cyclical slowdown in the Euro area and the fading prospect for the ECB to begin to normalize policy over any reasonable timeframe.

Furthermore, we run you through the unfolding of the EM FX hedges as policy easing balances slower growth. It looks like we are in for a period of relative calm where weak growth data remains balanced by supportive central banks, in an environment of low yields. The outcome of the G20 meetings of end-June was much in line with what markets anticipated and have arguably not changed opinions of the likelihood of a US-China deal. Growth indicators still point to the downside, but the Fed remains on course to ease in the upcoming months according to our US economists. While the market is already aggressively pricing the next year of cuts in the US, we believe the overall backdrop should remain supportive for the duration in local markets and without the need to FX hedge for now.

The valuations still appear neutral. Our BEER fair value models put currencies at fair value (refer above chart) and while EM FX positioning shows a small OW according to our client survey, this is not as stretched as positioning in EM sovereign credit and EM local rates which have much larger consensus OWs.

Our new EM FX risk appetite indicator shows bullish positions are starting to build, but are not stretched yet. Given our expectations of a more balanced near-term outlook for risk and still supportive duration backdrop, we have recently taken off our EM FX hedge moving FX from UW back to MW in our GBI-EM Model Portfolio. Courtesy: JPM