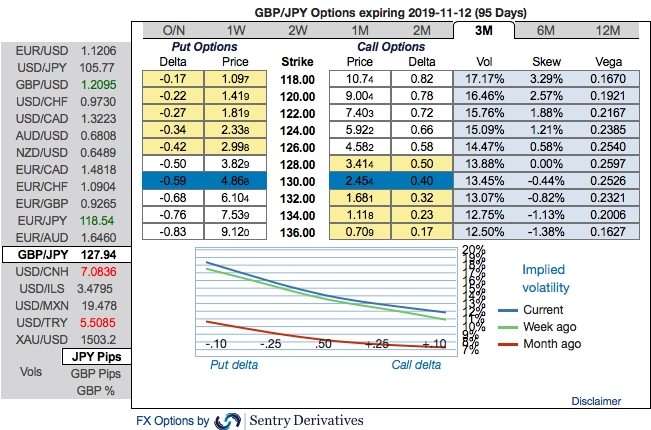 UK Q2 GDP growth having been side-lined for a few days, some intra-day volatility was injected back into GBP after an FT report suggested that PM Johnson is likely to hold a general election in the “days after” Brexit (currently scheduled for 31st October). Implied volatility in GBP pairs have only moved marginally higher but was already trading at their most elevated since January.

With the release of Q2 GDP this morning, attention remained UK-centric. Following strong growth in Q1 (+0.5%q/q), the monthly GDP outturns have been somewhat softer, Q2 GDP prints 0.0%, dip from the previous duration’s 0.2%.

While the Brexit-related factors, some of which may be temporary, might have played their part. Stockpiling is one such example. Ahead of the March deadline, surveys suggested firms increased their holdings of stock in order to mitigate the possible effects from a disorderly exit. Overall, a flat reading (0.0%q/q), in line with the BoE’s latest forecast.

Well, in that perspective, before proceeding further let’s just quickly glance at OTC outlook and suitable strategy for GBPJPY swings.

OTC outlook and Hedging Strategy: Please be noted that IVs of this pair that display the highest number among entire G7 FX universe.

While the positively skewed IVs of 3m tenors signify the hedgers’ interests to bid OTM put strikes up to 118 levels (refer above nutshells evidencing IV skews). Hence, it is wise to capitalize on momentary upswings of GBPJPY and deploy OTM put writing.

Accordingly, put ratio back spreads (PRBS)are advocated on the hedging grounds. Both the speculators and hedgers who are interested in bearish risks are advised to capitalize on current abrupt and momentary price rallies and bidding theta shorts in short run, on the flip side, 3m skews to optimally utilize delta longs.

The rationale for PRBS: The position is a spread with limited loss potential, but varying profit potential. The degree of profit relies on the strength and rapidity of price movement. The position uses long and short puts in a ratio, such as 2:1 or 3:2, to maximize returns as explained above. In most long/short spreads, you make money if the spot fx moves, but you lose if it remains in the middle “loss zone.”

Every underlying move towards the ITM territory increases the Vega, Gamma, and Delta which boosts premium. As you could observe spot GBPJPY keeps dipping, these delta longs would become in the money, while these derivatives instruments target further bearishness of this pair. Courtesy: Sentrix & Lloyds