FxWirePro: Spotlight On NZD/USD Hedging Perspectives As Kiwis Weakness To Resume In 2020 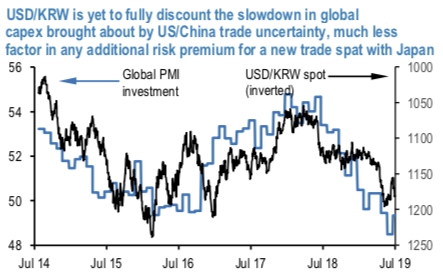 The Asian FX view remains biased in favor of weaker North Asian FX, against the dollar as well as on a relative basis versus less trade-challenged currencies of South Asia. KRW is the poster child for the former, as the won now has to grapple with trade anxieties on two fronts—the long-running US/China feud as well as the more recent outbreak versus Japan.

USDKRW has already undone three-quarters of its pre-G20 decline, but given the currency did not even fully discount, much less build in any risk premium for the global Capex slowdown prior to the eruption of the trade spat with Japan (refer above chart), the path of least resistance for the won is weaker.

Bank of Korea joined the dove camp with a 25bps cut to the policy rates. It makes sense to expect the BOK to remain dovish amid rising uncertainties, which is KRW negative.

Hence, we advocate deploying 3m debit call spreads at net debit using strikes at 1133/1240 levels with a view of arresting upside risks (spot reference: 1175). Thereby, one can achieve hedging objective as the deep in the money call option with a very strong delta will move in tandem with the underlying spikes.

The rationale for the trading: Please observe that the above technical chart is also clearly indicating the further upside risks. Courtesy: JPM