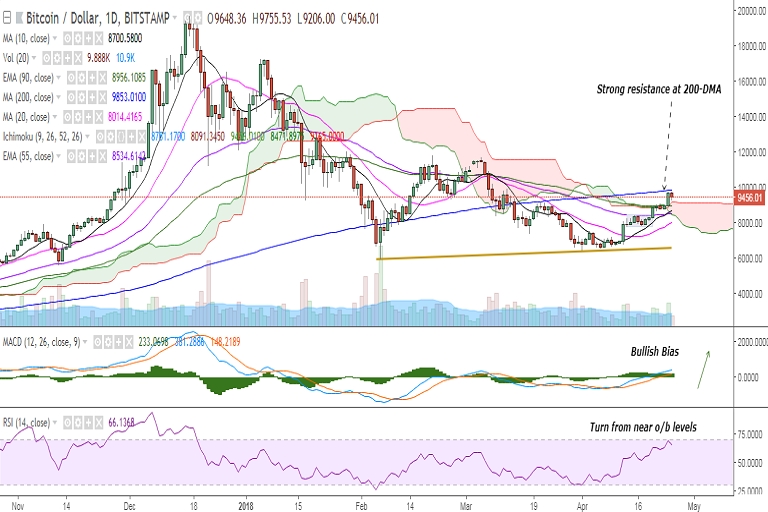 BTC/USD is trading in the red at 9450 levels (at press time) on Wednesday as it faces strong resistance at 200-DMA (Bitstamp).

Momentum studies: Overall bias appears bullish with MACD line above the signal line, the pair holding above cloud, and 10- and 20-DMA biased higher. However, RSI is showing a turn from near overbought levels and the pair faces strong resistance at 200-DMA.

A break above 200-DMA, coupled with a rollover of RSI to the overbought zone, would confirm further bullishness.

Call Update: We recommended staying long in our previous call. All the targets have been hit.

EconoTimes reached out to crypto experts for their views on the slump seen in bitcoin price in the last quarter and the recent recovery. They pointed to a number of factors ranging from tax payments, to SegWit implementation, to regulations, to growing institutional interest, among others.

According to Michael Terpin, founder of Transform Group and a partner at Alphabit Fund, both technical charts and the fundamentals point to bitcoin and other prominent altcoins, including Ethereum – “as having been oversold.”

“In addition, the ‘bad news’ of potential regulation has already been factored into the price, yet in my opinion the fact that the two-year battle over how to scale bitcoin and keep the fees low having been solved by SegWit implementation has not truly been addressed. Adoption keeps rising, usage keeps rising, and the vast majority of trades on exchanges now are buys. That all adds up to rising price until it meets resistance or profit-taking,” Terpin said.

Marshall Taplits, Chief Strategy Officer and co-founder, NYNJA Group, believes that people “sold” at the end of the year to pay their taxes, adding that “after April 15th tax day the trend reverses.”

“At the peak the entire cryptocurrency market cap was about 800 billion USD. We are at about 420 billion now, off of a low of about 250. I predict by 2020 we will have a 2 trillion market cap at least, which means that the prices of most decent cryptocurrencies are going to go through the roof… including Bitcoin. However we also have to note that Bitcoin dominance as a percent of the entire cryptocurrency market is at a near all time low of about 37%, down from 85% in January 2017. Bitcoin is really crashing, but in such a massively up market does anyone notice?" Taplits added.

Kesem Frank, Chief Operating Officer at AION and Co-Founder at Nuco, reflected on the constructive efforts to establish clear rules by global regulators, which in turn is driving institutional interest in crypto markets.

"Last week, in its Statement of Priorities for FY2019, the Ontario Security Commission emphasized the cryptocurrency domain as a priority. This could be read along a new Canadian rule expected to take effect on June 12, extending a (much) more liberal model of securities resale outside of Canada. According to the new role, even if we accept at face value the interpretation that cryptocurrencies are securities, Canadian residents who acquire securities of foreign issuers in prospectus-exempt transactions will be able to resell those securities without a prospectus and without further resale restrictions as long as they do so on a market or exchange outside Canada. This is a significant shift, that can explain heightened institutional attention to cryptomarkets,” Frank said.

Josiah Hernandez, Chief Strategy Officer of Coinsource, said: “There have been major strides made recently in regards to institutional accessibility and interest in the bitcoin market that are likely contributing to upside price pressure. The re-legalization of bitcoin in India, major financial institutions such as Goldman Sachs on the path to launching bitcoin trading desks, and the growth of large block OTC market for folks looking to buy large amount of BTC are the most notable of these strides.”

Josh McIver, CEO of ULedger, said: “The last month has been extremely promising for the asset class. I think the public catching wind of news that Goldman Sachs and other financial powerhouses are not just showing interest but proactively hiring and investing in the crypto markets is instilling a positive sentiment across the board. Traditionally, these institutions have been ahead of the curve in terms of savvy investment decisions and the public simply wants a piece of that.”

Eiland Glover, CEO and Co-founder of Kowala, said: “Word is getting out that traditional financial industry players are preparing to enter the crypto trading markets soon: Goldman Sachs reportedly hired crypto trader Justin Schmidt, Barclays is thought to be planning a crypto trading desk, Reuters reported that at least 56 finance firms will enter the crypto markets by October, etc. The entrance of these firms promises to provide much higher levels of liquidity along with a tsunami of new money into the crypto markets, driving today's prices higher.”

Chris Eberle - Chief Operating Officer, Swarm Fund, said: "In the past two weeks we've seen a massive price recovery in Bitcoin, Ethereum, and many 'altcoins' as well. Why? There's the US-centric view that tax refunds are driving the massive jump, but we think it's something much bigger. Even with FUD coming in from regulatory chatter in India, Iran, and the US, the global investment community is seeing that crypto is an unstoppable force. The early 2018 dip surely won't be the last, but I see this run taking BTC back over 10,000 and ETH back over 1,000.”

Sky Guo, CEO of Cypherium, said: "Bitcoin is not without its problems. In the long-term future, I foresee competitors taking over its spot as the top digital currency. But before that happens, I believe the market will rebound and Bitcoin will reach 30K.”

“Readers need to understand that the cryptocurrency industry is still in its infancy. The ups and downs of bitcoin pricing are largely due to the fact that it is still mostly a financial instrument. However, due to the overwhelming promise of blockchain technologies, I believe the long-term trend will continue to be upward. As cryptocurrencies gain more and more mainstream adoption, values will consistently climb while the market as a whole will become less volatile,” Ken Sangha, CEO of OPEN.