The Swedish central bank held its benchmark interest rate at -0.5 pct on July 3rd, as widely expected, saying monetary policy needs to continue to be expansionary for inflation to remain close to target despite strong economic activity. In addition, SEK is more vulnerable to a more dovish ECB stance as well as an escalation of global trade risks relative to NOK.

While SEK valuations seem to be cheaper given rate differentials (EURSEK should be closer to 9.60, if they had moved in line with EU-SWE 5-year yield differentials) and Swedish rates are low relative to Riksbank’s forecast. But in our view, the macro catalyst for mean reversion would be a more hawkish stance from the Riksbank, but this seems unlikely to be delivered in the near-term.

SEK front end ATMs vols and x-vols have richened by more than 1.5vol pts since the mid-April low as jittery spot on the back of dovish Riksbank and European political risk pushed the gamma higher, as per JP Morgan’s FX options analytics. However, even as the rest of the G10 vols consequently turned lower, SEK vol held. As the divergence extended, SEK ATM vol notably reached the multi-year high vs G10 vols (refer below chart). 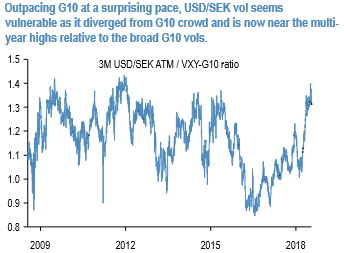 While realized spot behaviour, if anything, has been supportive of the firm SEK gamma vols, the recent high frequency realized vols have actually drifted lower (refer below chart) as the light summer calendar, diminishing impact of the dollar positioning and flatter US rates curve started to weigh. 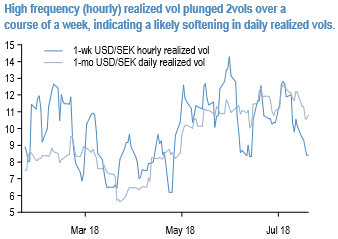 The lack of catalyst should suit vol sellers just fine, and attract selling of vulnerable SEK gamma. The outcome of the July Riksbank meeting was hawkish but subsequent developments—CPI and the minutes—stand in contrast with Riksbank’s initial resolve, leaving our analyst neutral SEK.

Admittedly there is a near-term risk from SEK going through swings amid still cheap valuations on one side and its vulnerability to trade war developments, July CPI print later in the month and September 9 general election on the other side.

On the back of those risks, the favoured expression of the SEK vol view is to use at-expiry digital ranges to floor maximum losses while eliminating the intra-day spike risk in spot around the abovementioned risk event. The selected strikes of 9.10 and 8.60 have held for about 3 months (since 2017 for 9.10 strike).

This is a far cry from the optically attractive 5:1 type gearing on DNTs, but we would rather accept a lower payout ratio in order to avoid American barrier risk. In any case, 1:2.4 is still materially better than the 1:4 average return/drawdown ratios of vanilla straddle selling strategies that nonetheless have a rich P/L track record over long histories. 2M 8.60–9.10 at-expiry digital USDSEK range (sell 8.60 USD put/SEK call, sell 9.10USD call/SEK put) for 42.5%/46.5% USD. Courtesy: JPM