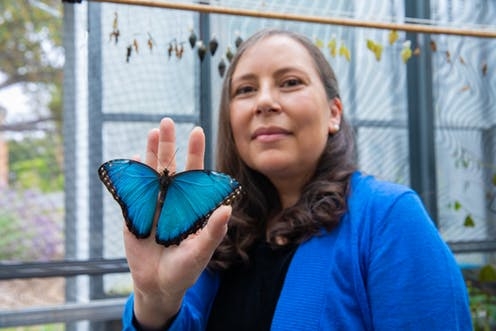 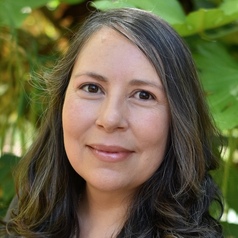 An award-winning scientist and professor of evolutionary biology, Adriana Briscoe studies the evolution of vision in butterflies and how they see color. Briscoe is currently working on her first book, which is a memoir about, what else? Butterflies. A descendant of Mexican immigrants who fled the Mexican Revolution at the turn of the century and settled in San Bernardino, California, Briscoe has called for more Latino teachers in science. Below is an edited version of an interview with her that explains her work, roots, and why the US needs more Latino STEM teachers.

I am fascinated by the sensory world of animals, which is both similar and different from our world. Butterflies can migrate using ultraviolet polarized light, a feature of sunlight we can’t see, and by sensing the earth’s magnetic fields. They can also see colors that we cannot. I often wonder, why is the natural world so colorful? Are all color patterns meaningful to the animals that bear them? Or are some colors meant to help the animals adapt to their thermal environment? I take an interdisciplinary approach to the study of animal coloration and vision.

What’s the most interesting science you’ve done in the last five years?

Butterflies cannot tell us directly what colors they recognize so I’ve trained them to show me what colors they can see. People can train a butterfly to fly toward a colored light if you reward it with sugar water. After several bouts of training, if you give a hungry butterfly a choice between two colored lights, it often will go toward the light associated with the sugar water. Seeing a butterfly you’ve trained fly towards the right light is a bit electrifying. Their behavior tells you something about their sensory world – what colors do and do not matter to them, what colors they can and cannot see. Some butterflies have red-green color vision, others are red-green color blind, like some humans. 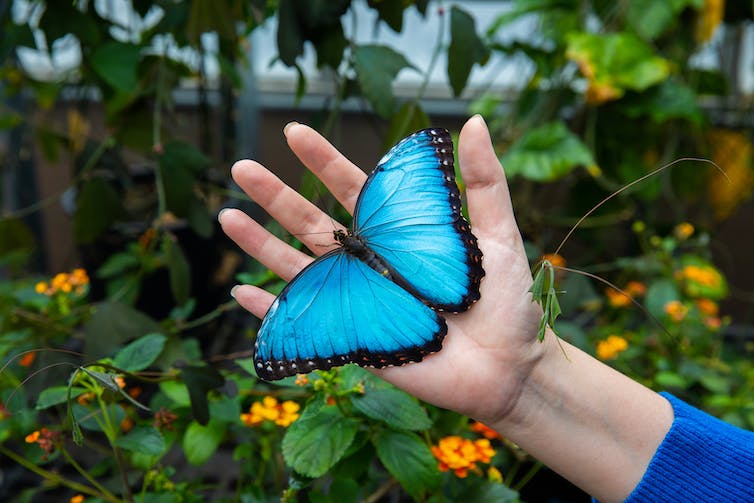 Adriana Briscoe holding a Morpho peleides butterfly, also known as a blue morpho, in the greenhouse at the University of California, Irvine. Wes Koseki - UCI School of Biological Sciences

What prompted you to get into teaching?

I come from a family of Mexican American teachers. Growing up, I heard stories about how my grandmother and mother had to fight for their education. In 1937 my maternal grandmother, Consuelo Lozano, a daughter of Mexican immigrants, was the only Spanish-named woman attending Colton High in San Bernardino County, California to graduate. Two years later, she married my grandfather, who had dropped out of high school to pick oranges during the Great Depression.

During World War II my grandmother inspected airplanes at the San Bernardino Army Air Field. My mother, Loretta Mejía, was the only Spanish-named woman from San Bernardino County, the largest county in the U.S., to graduate from the University of California, Riverside in 1965, which at the time had more than 3100 students.

From the ages of six to nine, I watched my grandmother, who went back to school to earn her teaching degree in her 60s, study at home with other student teachers. These women were part of the largest group of bilingual teachers to graduate at one time in the U.S. Both my mother and my grandmother became bilingual elementary school teachers. Watching my mother prepare lessons to help kids learn how to read night after night, imbued me with a deep respect for the work that teachers do.

You’ve spoken of the need for government action to get more Latino individuals to teach science. Why do we need government intervention to make this happen?

Many Latinos in the U.S. live in low-income communities like the town where I grew up. Food insecurity is widespread among college students. Government intervention is especially needed to increase the number of STEM workers and educators. Most students can’t afford to work as unpaid interns in laboratories, yet gaining experience in the lab is key to becoming a scientist. Doing science and teaching science are costly enterprises. For every $100,000 I spend on students, I have to obtain a grant of $150,000 due to indirect costs.

We need more highly trained teachers and training is expensive. I was able to become a scientist because by the time I applied to college, my formerly working class parents had elevated their economic status through education and could afford to pay for my undergraduate tuition at Stanford. When it came time to go to graduate school, private foundations such as the Howard Hughes Medical Institute and the Ford Foundation paid my way and the U.S. National Science Foundation paid for my research.

Glenda Flores has noted in her award-winning book “Latina Teachers” that affirmative action policies primarily benefit white women and have led to an increase in the proportion of white women in professions like medicine and law. Teaching and nursing, professions previously occupied mostly by white women, have become more open to Latino teachers and teachers of color. The number of Latino teachers is increasing. In California, 20.2% of K-12 teachers are Latino, although the number that are U.S. born is not entirely clear. My research with Dylan Rainbow suggests the percent of Latino science and math public school teachers in California is currently 3%, a number we clearly need to work on.

Howard Hughes Medical Institute and the Ford Foundation were early supporters of The Conversation US.