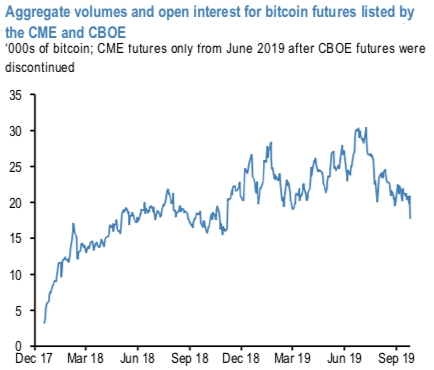 Bitcoin and digital assets are volatile investments. Many traders attempt to manage their risk simply by buying an asset when the price drops or selling it when the price goes up.

The downside of this tactic is that oftentimes money is left on the table after you leave the market. If the price continues to rise after you sell, for example, you’re missing out on profits you could’ve earned had you left your position open.  A key benefit of futures trading is that you can hedge existing spot positions without additional crypto - allowing you to be agile and prepared for any market environment.

Cryptocurrency futures allow us to maximize your returns by utilizing the power of leverage to multiply your profits and apply advanced trading strategies. Use futures to speculate on the direction of the market and minimize risk, all while holding less crypto than on a spot exchange.

Bitcoin futures trading at ICE’s Bakkt has come a long way ever since its tepid debut in late September.

Bitcoin (BTC) has been wedged in a sideways trend in the recent times, as it has struggled to harvest any significant upwards momentum despite the strong support that it has established at $8,500 areas.

However, CME’s Bitcoin open interest may indicate an underlying strength for the cryptocurrency, and couple of analysts could signal that it is most likely to stimulate the pace of price momentum that could send BTC’s price surging with skyrocketed pace.

Bakkt’s physically settled futures saw a tepid start, volumes are slowly gaining popularity with a fractional amount of the volumes than that was observed on the 2017 debut of CME’s cash-settled contract and yet the firm has since reported consistent gains in trade volume, having last week crossed $1 million in open interest attracting institutional client base.

While Bakkt gains traction during the course of same period. Bakkt futures contracts have surged in the recent times, recording all-time highs  during the week surpassing the $15 million USD mark. They took twitter handle to announce record daily volumes of 1,756 contracts.

Whereas the number of open interest long contracts on CME is now at October lows despite the 200%+ increase last month.

Hence, we recommend for trading purpose, avoid contracts with lower volumes and lower open interest. Generally, the volume and open interests would be small at the early stages of futures contract life and expands as it reaches the maturity period and again drop during close to expiration stage.

The crypto-exchange backed by the owners of the New York Stock Exchange set new all-time high just over a week ago when 1,756 Bitcoin futures contracts worth about $15.5 million changed hands.

We note, however, that these low initial volumes carry echoes of the initial listing of cash-settled bitcoin futures by the CME and CBOE in December 2017. Initial volumes were low (refer above chart), however, the open interest kept growing steadily. The listing of the CME futures coincided with all-time highs in bitcoin prices, and researchers at the San Francisco Fed suggested that by providing a market where bearish positions could be more readily expressed the listing of these futures contributed to the reversal of bitcoin price dynamics. In a similar vein, it may be that the listing of physically settled futures contracts (that enables some holders of physical bitcoin e.g. miners to hedge exposures) that has contributed to recent price declines, rather than the low initial volumes.