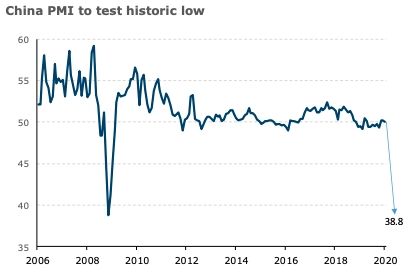 China’s manufacturing PMI for February is expected to hit an historic low of 38.8. The impact of the virus outbreak will see PMI drop further than the previous low in Q4 2008, according to the latest report from ANZ Research.

All high frequency trackers point to exceptionally low economic activity since the Lunar New Year. The high work resumption rate reported by the authorities does not represent capacity utilisation which is estimated to be about 20 percent of normal levels as of end February.

The biggest risk facing the economy is the breakdown of the liquidity chain. We estimate a shortfall of CNY2.6 trillion in cash flow in the corporate sector, the report added.

The virus outbreak has caused lack of cash revenue given the demand shock; mismatch of accounts receivable and payable; and insufficient cash to service loan and interest payments.

If the authorities cannot address the cash flow issue effectively, the outcome for bad loans, defaults, bankruptcy and employment will be severe, ANZ Research further noted.