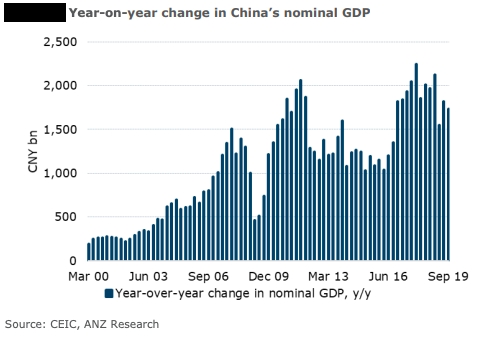 With China’s gross domestic product (GDP) having expanded 6.2 percent on a year-to-date basis in Q3, it is expected that the economy will maintain full year growth at 6.0 percent in 2019, unless GDP growth falls below 5.5 percent y/y (or 1.0 percent q/q) in Q4, according to the latest report from ANZ Research.

In nominal terms, China’s GDP growth has retreated to 7.6 percent y/y in Q3 from 8.3 percent in Q2, signalling that the economy is slowing at a quicker pace than what the headline figure indicates.

"We also notice that China’s industrial production (IP) data tend to rise at quarter-ends in 2019. For instance, the headline growth rates rose 1.4ppt in September, and 1.3ppt in June," the report further commented.

The increase in retail sales in September does not point to a broad-based recovery in consumption. To further support economic growth, fiscal policy is the only viable tool. However, Chinese policymakers will also need to address existing funding constraints faced by local governments.

The increase in retail sales in September does not point to a broad-based recovery in consumption. The acceleration of retail sales growth was mainly due to a smaller contraction in auto sales, which fell 2.2 percent y/y in September compared with -8.1 percent prior.

Meanwhile, the annual issuance of special local government bonds, which are important funding sources for infrastructure investment, had been completed in September and almost 90 percent of it has been utilised, according to the government, ANZ added in the report.