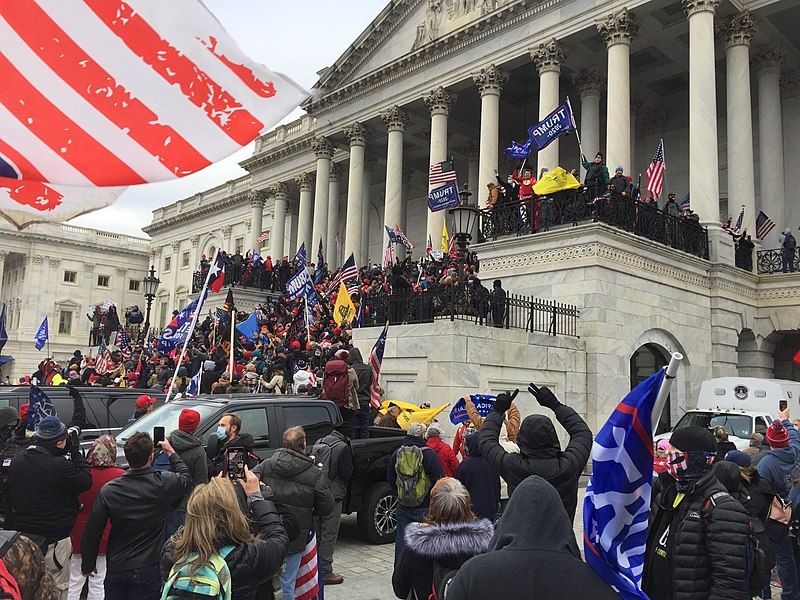 Following the Capitol insurrection last January 6, many of the people involved in breaking into the Capitol have been identified and are suspected of having some connection to the riots, including Russia Insider founder Charles Bausman. While Bausman claimed he never entered the Capitol on January 6, new video footage suggests otherwise.

The Southern Poverty Law Center’s Hatewatch reported that the Europe-based intelligence group OSINT obtained video evidence of Bausman entering the Capitol on January 6 amongst the mob. Michael Edison Hayden on Hatewatch reported that Bausman, who founded the Russia Insider news outlet that is pro-Kremlin, got involved in the “Stop the Steal” movement in Pennsylvania and later went to Washington DC on January 6.

“The findings by the OSINT group build on Hatewatch reporting showing that Bausman traveled to Washington DC on the day of the insurrection, then disappeared from his home in Lancaster, Pennsylvania, and reemerged in Moscow. In the months since, he has served as a talking head on Russian television, commenting on American affairs with a reactionary point of view. Hatewatch previously noted that Bausman claimed on a Russian Orthodox Christian-themed television station to have stopped short at the Capitol’s balustrades without entering the building,” said Hayden.

The video footage obtained by OSINT showed a man resembling Bausman inside the Capitol during the siege. Hayden noted that Bausman also claimed that his reason for entering the Capitol was for journalism covering the events of January 6 rather than a supporter of twice-impeached President Donald Trump. OSINT also cited the site-by-side images of Bausman and the man that was in the Capitol, wearing a red hat and blending in with the supporters.

The pro-Trump mob was also attempting to target House Speaker Nancy Pelosi, with some calling for her to be executed during the siege. According to US District Judge Emmet Sullivan, as reported by NBC4 correspondent Scott MacFarlane, some of the insurrectionists “morphed into terrorists” on that day.

During a plea hearing for insurrectionist Dawn Bancroft, who allegedly said that she wanted to shoot Pelosi in the head, Sullivan highlighted the threat Bancroft made to which she admitted, then questioned the prosecutors as to why she was not charged with making a threat against Pelosi’s life.

Bancroft said that she made the remark while leaving the Capitol and in a “jovial” manner. However, Bancroft also admitted that it was still a “dumb” thing to say. Bancroft pleaded guilty to a low-level misdemeanor, and Sullivan cited that her sentencing would be held in 2022.