U.S. retail sales likely to have grown strongly in December 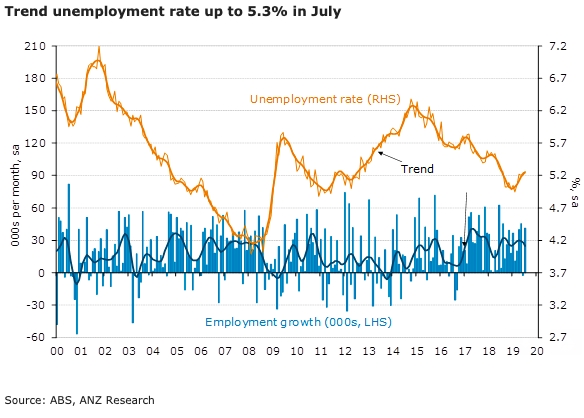 Australia’s surprisingly strong employment gain of 41.1k in June was largely due to a 34.5k rise in full-time employment. The unemployment rate remained at 5.2 percent with the participation rate increasing to a fresh record high of 66.1 percent.

However, in trend terms, unemployment snuck up to 5.3 percent, back to where it was a year ago. Underemployment was up 0.2ppt to 8.4 percent, so total underutilisation rose. There is still too much spare capacity in the labour market but the strong headline employment result weakens the domestic case for a September rate cut, according to the latest report from ANZ Research.

Employment increased by 41.1k workers in July, rebounding from a downward revised −2.3k in June. This pushed annual growth back up to 2.6 percent. Full-time employment (+34.5k) was the main contributor to the headline result but part-time employment also rose by 6.7k.

The unemployment rate was unchanged at 5.2 percent. However, at two decimal places, there was only a 0.01ppt decline despite the solid rise in employment. Trend unemployment hit 5.3 percent for the first time in a year. Underemployment rose 0.2ppt to 8.4 percent, so spare capacity has increased. Females boosted overall participation to a fresh peak of 66.1 percent despite a small decline in male participation.

Queensland recorded the largest gain of 19.9k workers across the states, followed by New South Wales (+13.0k), Victoria (+3.6k) and Tasmania (+1.6k). Western Australia was unable to maintain the strength from June, with employment falling by 4.2k and the unemployment rate rising 0.2ppt. South Australia recorded its highest unemployment rate in two years (6.9 percent) due to a jump in participation and a fall in employment.

"With underemployment moving higher and the ANZ Labour Market Indicator still pointing to an unemployment rate of around 5.2–5.3 percent in H2 2019, we expect to see another rate cut this year. However, it now appears less likely for September barring a sharp global deterioration," the report added.