Tomlinsonus inhabited a shallow sea with abundant sea lilies. It probably used its stilt-like legs to move across the seafloor while looking for prey or carcasses. (ROM/Christian McCall), Author provided 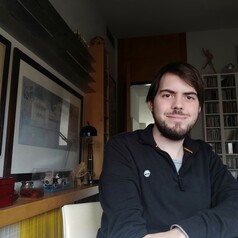 Paleontology is undergoing a new renaissance. Since the mid-20th century, genomics has become the main focus of evolutionary biology. But the last few decades have shown how the study of fossils can complement genomic data and improve our understanding of the history of life on Earth.

Every fossil site provides information about the ecology and evolution of ancient life, but a handful of fossil sites are providing unique, critical data. These sites of exceptional preservation are known as laggerstätte. These sites can contain fossils with soft tissues, which are unmineralized structures that would normally decay is most conditions, thus usually becoming absent from the fossil record.

The preservation of fossils consisting of soft tissue requires elusive conditions, like low-oxygen conditions that halt decay. Our research team found soft-tissue fossils in a well-known site in Ontario for the first time, among them a rare arthropod fossil.

This surprising find sheds light on what the Ordovician Period (the second period of the Paleozoic Era) may have looked like. It also adds a new puzzle piece to one of the most enigmatic arthropod groups in the fossil record.

The Royal Ontario Museum holds fossils from a plethora of sites around Canada. One of them is the Kirkfield Formation of Southern Ontario. Around 450 million years old, the Kirkfield was a shallow tropical ocean at the end of the Ordovician Period. The formation is well-known for its hard-shelled fauna, which includes trilobites, brachiopods and complete, exquisitely preserved sea lilies (crinoids).

Fossil collector George Kampouris and his team were working a Kirkfield site near Brechin and discovered, for the first time, evidence of soft tissues. Later, paleontologists at the University of Toronto under the direction of Jean-Bernard Caron analyzed the new fossil specimens.

Despite the fairly limited number of specimens, the findings show organisms that, in normal conditions, would not have been preserved. Among them were macroscopic branched algae, which confirmed that this was indeed a shallow-water environment; a carapace that could be the remains of a shrimp-like animal; and, most importantly, a marrellomorph. With less than a dozen species known worldwide, marrellomorphs are one of the rarest arthropod groups in the world.

Arthropods are the most diverse group of animals in the world. They can be easily classified into a handful of groups: chelicerates (which includes spiders and mites), myriapods (like centipedes and millipedes), crustaceans (like crabs and shrimps) and insects.

Some arthropod groups, like the trilobites, have gone extinct, but their mineralized exoskeletons have left us an excellent fossil record. 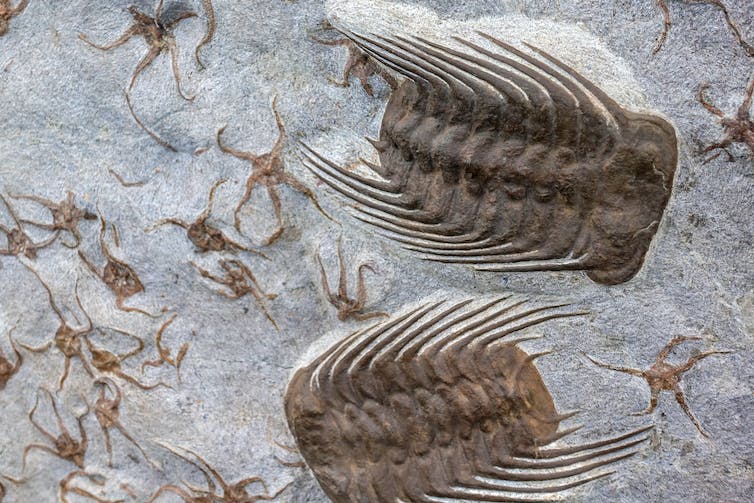 The hard exoskeletons of trilobites have been remarkably preserved. (Shutterstock)

The evolutionary success of arthropods is an intriguing question that traces back to the beginnings of the Cambrian period, more than 520 million years ago. Sites of exceptional preservation include the 506-million-year-old Burgess Shale in British Columbia. There, the fossil record shows a “burst” of innovation in the first steps of arthropod evolution, with the emergence of many groups that later became extinct.

One of the most common and well-known species at the Burgess Shale is Marrella. Marrellomorphs are characterized by a big spiny shield, one or two pairs of large appendages, and a short multisegmented thorax. Despite the abundance of Marrella fossils, there is no consensus on where marrellomorphs place in the evolution of arthropods.

The segmentation of the head is usually considered a good tool to recognize and reconstruct the evolution of arthropods, but the head of marrellomorphs is nothing like any other arthropods we know of. We know marrellomorphs survived until the Devonian, around 410 million years ago, but only a handful of species have been discovered, with fossils found in Argentina, Morocco and Germany. Finding any new fossil of this group of arthropods, then, is critical to understand what they really were.

These present-day relatives of spiders and horseshoe crabs live on seafloors and use their elongated limbs to propel themselves. These limbs are particularly similar to those in Tomlinsonus, and so it is possible that Tomlinsonus followed a similar strategy.

The fossil of the marrellomorph Tomlinsonus dimitri. Tomlinsonus had a shield with four elongated spines bearing smaller spines. This shield covered its head, which had one pair of large legs that resembled stilts. (Moysiuk, J., Izquierdo-López, A., Kampouris, G., & J. Caron/Journal of Paleontology), Author provided

Whether this has evolutionary implications will depend on further marrellomorph discoveries, as the puzzle of their evolutionary history is still far from its first stages.

Soft-tissue fossils require particular environmental conditions for their preservation. As we continue to explore sites of exceptional preservation, we will reveal additional information about the fossil record and fill in some of the evolutionary gaps.

One may think that we already know all of these sites. However, areas with remote access, or in countries where paleontological efforts are being strengthened, have a strong potential for discovery. Several fossil sites can be rediscovered after being lost after decades of unexploration. Well-known sites like the Burgess Shale can be also expanded through adjacent outcrops, revealing vastly different animal communities.

The discovery of Tomlinsonus dimitrii at Brechin shows that even previously known sites can still produce new discoveries. With time and more hands, new discoveries are guaranteed.