Why we've the weakest economy since the global financial crisis, with few clear ways out 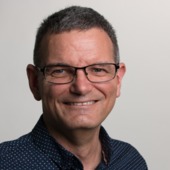 The Australian economy is tepid, with consumer spending the weakest in ten years, business investment shrinking, and economic growth too weak to cover population growth.

Were it not for very strong growth in export income and the biggest surge in government spending in 15 years, the economy would have shrunk.

The treasury believes the Australian economy is capable of growing at a sustained annual pace of 2.75%. The growth rate in the past finacial of 1.4% reported on Wednesday is only half that.

Not since September 2009 has the gap between what the Australian economy is capable of and what it has been delivering been so wide. 2009 was the year of the global financial crisis. 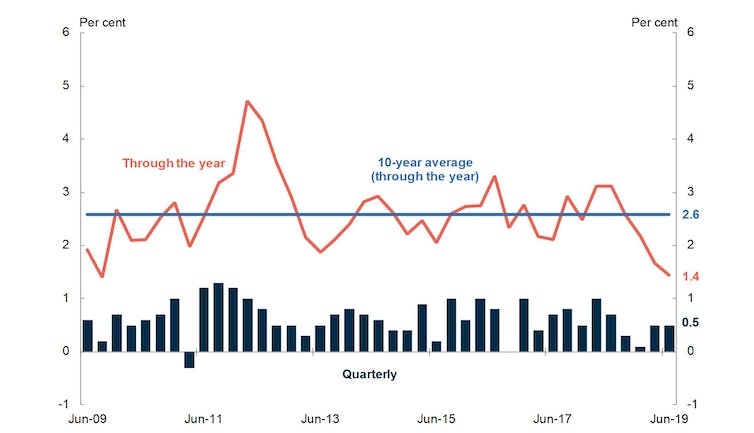 Economic growth has rarely been as low as 1.4% outside of a recession.

Household spending, which accounts for more than half of total spending, also failed to keep pace with population growth. The inflation-adjusted growth rate of 1.4% was also the lowest since the financial crisis. 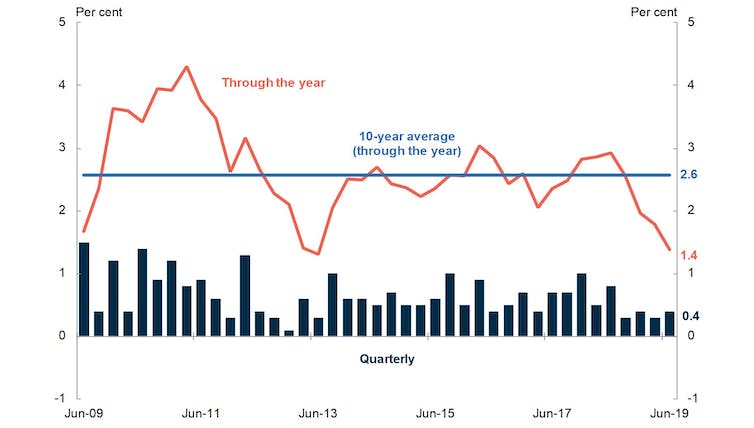 Other figures released on Tuesday show retail spending dipped a further 0.1% in July.

Hardest hit was spending in the 2018-19 financial year was spending on cars. Updated figures released at the same time as the national accounts show sales of new cars down 10% over the year to August.

Treasurer Josh Frydenberg said he preferred to think that households were delaying rather than abandoning purchases of cars, waiting until the economic outlook was clearer.

Growth in consumption by category 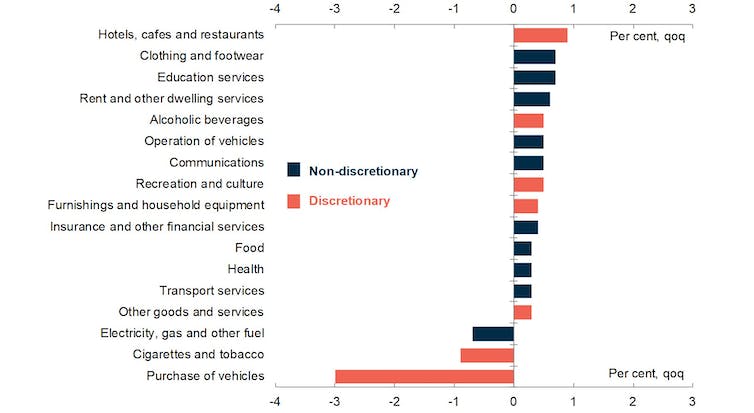 Weighing on consumers is an extended period of unusually low wage growth that the national accounts show has brought the share of national income paid out as wages down to just about its lowest point since 1964.

Although the wage and superannuation bill increased, climbing 5% over the year as employment grew, the share of national income paid out as wages and super fell to 52% – the lowest since the global financial crisis, and before that the lowest since the Beatles toured Australia and Donald Horne published The Lucky Country.

Also weighing on consumers has been housing. Investment in housing (including alterations and additions) was down 9.1% over the year. Business investment fell 10%.

Company profits grew 12.8%, but leaving aside mining companies, whose profits grew strongly on the back of higher prices and export volumes, other profits grew only weakly, climbing 1.8%.

Mining income pushed up nominal GDP (the raw dollars unadjusted for prices that drive nominal incomes) up a healthy 5.4%, probably delivering the government a budget surplus one year earlier than promised, in 2018-19. Frydenberg said he already knew the result and would unveil it in a fortnight. His smiles suggested it’s one he likes. 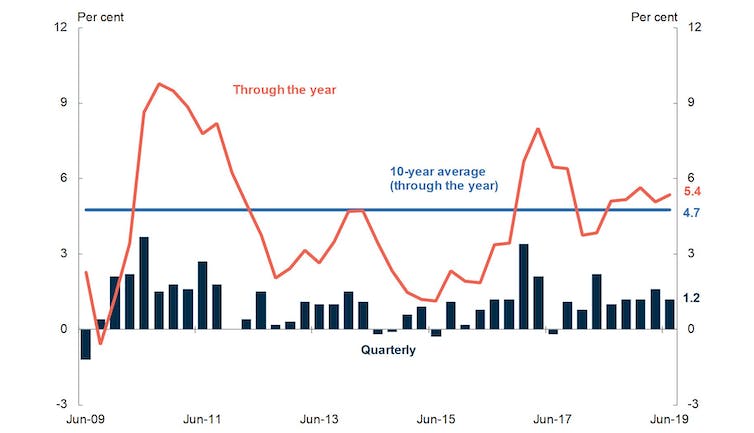 Mining income also pushed up what the Reserve Bank regards as the best measure of actual living standards, which (perhaps surprisingly) is not GDP per capita, which is going backwards, but a lesser known and purpose-designed measure known as “real net disposable income per capita”. It grew a healthy 2.65% over the year and a very healthy 1% over the quarter.

It is true that much of it was paid out in mining profits, but it is also true that it isn’t necessarily right to latch on to the cruder measure of GDP per capita and say that living standards are going backwards.

Helping maintain living standards was a very healthy growth in government spending, the highest for some time – not government infrastructure spending, that actually fell over the year as some state projects wound up, but day to day spending on things such as the National Disability Insurance Scheme.

The economy is in a bad way. Aside from mining and government spending, the only real bright spot is employment growth, and as the Reserve Bank often points out, employment growth doesn’t tell us much about what’s going to happen.

It tends to lag everything else in the economy, by up to nine months. By the time it turns down, other things already have.

Frydenberg doesn’t seem too worried. For now he is banking on the tax cuts and the interest rate cuts in June and July to lift investment and spending.

The treasurer has two Plan B’s. One is an aggressive investment allowance for business. He spoke about introducing one last week, but on Wednesday he indicated that he wasn’t planning to do so until next year’s May budget. If needed, he could bring the date forward.

The other is another Reserve Bank rate cut, most likely at the board’s meeting on Melbourne Cup Day, by which time it will have before it an updated set of inflation figures.

Frydenberg revealed on Wednesday that he is taking a close look at the government’s contract with the Reserve Bank, a formal written agreement which is renewed after each election.

He has asked the treasury to look at it to see whether it needs to be tightened to make the bank more responsive to the state of the economy.