View from The Hill: Malcolm Turnbull struggling to shore up his border 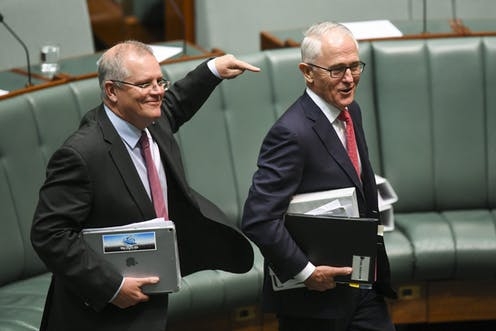 He won. But will he win again? AAP/Mick Tsikas

Malcolm Turnbull is still upright, but he will have to be a miracle worker to survive and lead the government to the election.

Peter Dutton’s 35 votes – to Turnbull’s 48 – is a solid base for a challenger to build on. That is the usual way it goes – wound the first time, kill the second.

But it’s not the inevitable course. In 1982, Prime Minister Malcolm Fraser saw off Andrew Peacock, and there wasn’t a subsequent vote. But then the margin was a very healthy 54-27.

The many who voted against Turnbull on Tuesday have mixed motives.

The conservatives want to own the Liberal party – none of that old “broad church” nonsense - and turn it further to the right. They seek a prime minister who is “one of us”.

These include the revenge group of Tony Abbott and his small coterie.

Then there are the Queenslanders, from whom Dutton received substantial support. They have been panicked by the Longman byelection, when the Liberal National Party’s primary vote plunged.

In Tuesday’s Coalition meeting, Tony Abbott homed in on Longman, taking about inflated expectations and Turnbull making it a test of leadership. Turnbull defended himself, citing the difficulties of managing expectations, the headwinds, a popular Labor candidate, ALP money.

The Queenslanders’ panic is understandable. But while Dutton might save some seats in that state, it is not clear he would be a total winner there. Queensland is politically lumpy. Remember, the Palaszczuk Labor government has just been re-elected.

Others in the Dutton camp are those who have been offended by Turnbull in some way, who feel he hasn’t supported them, has demoted them or not promoted them.

Under questioning, Dutton did not rule out another challenge. Of course not. No one would have believed him if he had.

He gave his reason for running as believing “I had the best prospect of leading the Liberal party to success at the next election,” adding “that was not to be today”.

He’s now on the backbench, freeing him to speak out – and he listed the issues he considers important. “I would like to contribute to public debates”, he said.

“I believe strongly that we can win the election if we get the policies and the message right - about lowering electricity prices, about making sure that we can do more on infrastructure and in particular around the migration program, until the infrastructure can catch up in our capital cities.

So he’s set himself up as the “go to” man for opinions, just like Abbott is.

Dutton will be now working assiduously to capture that handful of votes needed to swing the numbers to him.

While history and circumstances suggest the momentum is with Dutton, it is not necessarily an easy ride for him, if things drag on a bit.

Some in the Liberal party may start to ask, would someone else be better than either Turnbull or Dutton?

Unless a second strike comes very quickly, opinion polling testing Dutton’s acceptability, or lack of it, will also come into play. Usually challengers (Julia Gillard, Kevin Rudd, Tony Abbott) are well-known. Dutton has a very narrow profile. He will now be illuminated by flood lights.

In trying to regroup, Turnbull will have to deal with some of the issues worrying his MPs that Dutton is exploiting. One is the gripes of the Catholic education section. Another is population and immigration.

He’ll deal with the first with some extra money. An inquiry into population might take off some of the pressure in that area.

While addressing these and other issues, Turnbull walks a fine line. What he shouldn’t do is try to cling to his job by selling out even more of his principles. It won’t work; if his prime ministership is to end it is better for it to finish honourably than in unsuccessful grovelling.

But Turnbull’s central challenge - and his only real hope - will be to try to convince as many colleagues as possible that actually it is he, not Dutton, who has “the best prospect of leading the Liberal party to success at the next election”.

Although, objectively, at least on the polls, neither is likely to do so.