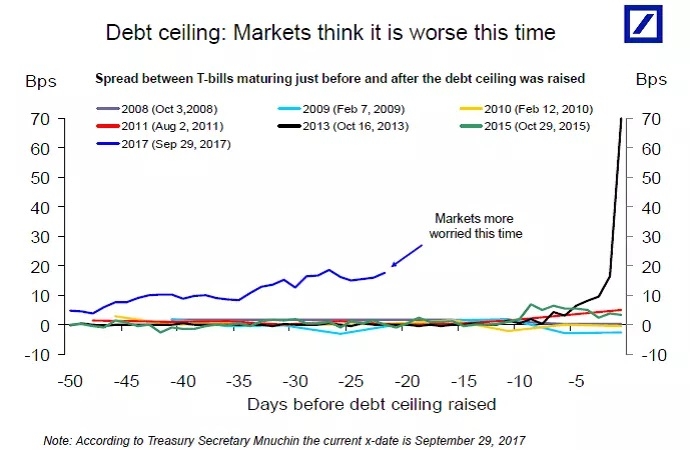 Investors are more worried about U.S. debt ceiling increase this year than any other year before. This chart from Deutsche Bank shows worried investors are already pushing short term yield higher and the spread between debt maturing before debt ceiling debacle and those maturing after has increased to the highest level compared to any other previous years. Short-term government debt maturing right after the September 29 debt ceiling deadline is now being priced with a yield of about 20 basis points above their counterparts that mature just before that date, according to an analysis by Deutsche Bank. The difference, or spread, has been rising as the deadline has neared (blue line in the chart above) and it is presently more elevated than at this point from past debt ceiling episodes.

Investors are fearing that the divisions between lawmakers in the United States that have widened to the highest after Donald Trump’s election will prove to be a major threat to the debt ceiling increase. President Trump himself said that he is ready for a government shutdown if Congress doesn’t pass funding for his proposed border wall along the Southern border of the United States. The upcoming debate in Congress over the debt ceiling will be an important test of the Trump administration’s ability to overcome sharp divides both across political parties and within the Republican Party.

Back in 2011, the rating agency Standard & Poor downgraded U.S. government rating from AAA to AA over a delay in debt ceiling increase that pushed the country very close to a technical default. It has warned that a failure to increase the debt limit could prove more catastrophic that the Great Recession of 2008. Another rating agency Fitch has warned that the United States would lose its AAA credit rating if the policy makers fail to increase the debt ceiling in a timely manner.

While the U.S. debt market is signs of worries, Wall Street doesn’t seem concerned at all. Volatility remains at historic low, while stocks are close to their record highs.