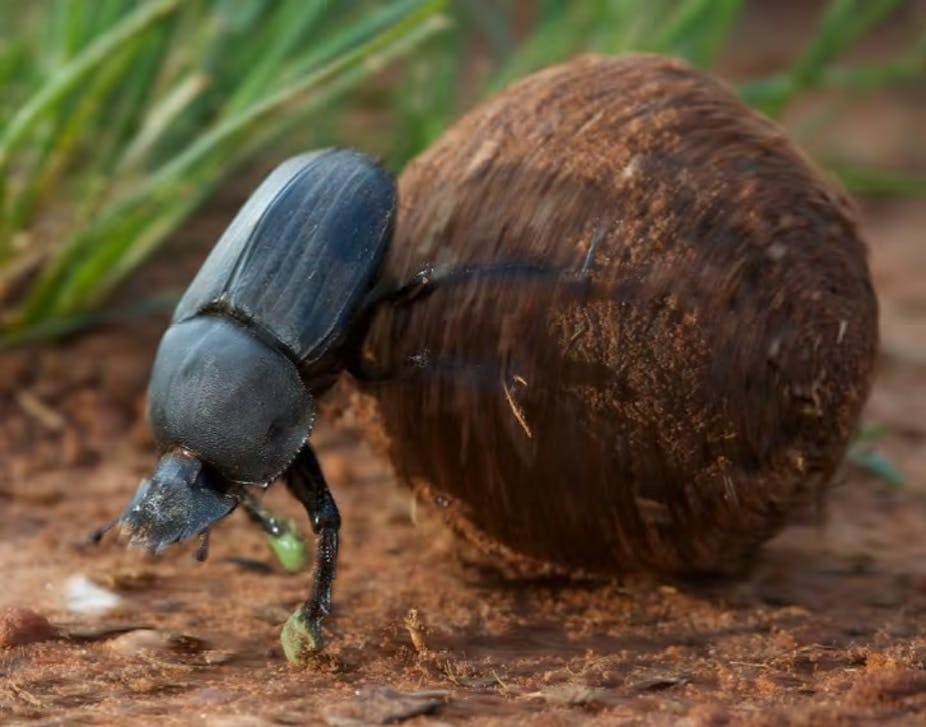 A dung beetle wearing silicon boots to protect its feet from the hot soil, as part of an experiment. Courtesy of Adrian Bailey/baileyphotos.com 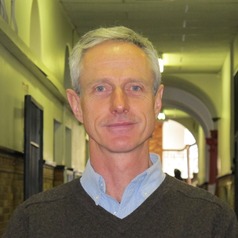 Edited extract from “The Dance of the Dung Beetles” published by Wits University Press.

Dung beetles have been ever-present in the history of the West – but oddly, less so elsewhere – in religion, art, literature, science and the environment. What we understand about them now mirrors our greater understanding of the important role they play in keeping our planet healthy.

The story of these beetles, which we tell in our new book “The Dance of the Dung Beetles”, comes with a few unexpected twists. It moves from the tombs of the pharaohs to the drawing rooms of directors of the Dutch East India Company to the remote forests of Madagascar. It is a big story carried on the back of a family of small creatures who seldom diverge from their dogged pursuit of dung in its infinite variety and abundant supply.

Like the housemaids of Victorian Britain, who tended fires and households in the small hours while the Empire swept across the globe, they remain largely unseen and ignored. Yet without those housemaids, the world would have a lot more dirt in it. In the same way, dung beetles are largely invisible. And yet without their vital activities, the world would have a lot more faeces in it.

Dung beetles have relatively minuscule brains, much of which is devoted to analysing smells. But they also process visual information that even humans with their vast brains struggle to comprehend. This was shown in a study we conducted with other scientists that revealed how dung beetles use the light of the Milky Way to orientate.

The original story was picked up way beyond the scientific literature and spread rapidly around the world. We were struck by how the tale of a lowly beetle and the distant Milky Way engaged popular imagination when so much other information about dung beetles is equally impressive, if not even more fascinating.

Wearing a cap prevents this beetle seeing orientation cues in the sky. As a consequence it rolls its ball around in circles, like a human lost in a featureless desert. Courtesy Marcus Byrne

This realisation prompted us to respond on behalf of these little creatures, which can be found on every continent except Antarctica, to show that they deserve better press than to be seen as mere dung-grubbers – some of whom happen to orientate by the stars.

Together with earthworms and ants, dung beetles represent a trinity of earth transformers. They literally change the earth beneath us, and they do so at absolutely no cost to us. Dung beetles play a largely unexplored role in soil health, which is increasingly important in a hungry world full of people. There is still so much we do not know about the 6,000 species that clean our world.

We do not know, for example, exactly what they eat. Most eat dung, some eat carrion (dead animals). But getting by on low nutrient waste requires careful selective feeding performed by specialised mouth parts. Microorganisms in the dung and soil might also have a role, fixing nitrogen from the atmosphere to increase food quality and soil health.

We know how dung beetles use celestial cues to orientate, but it’s not clear how a brain so small can process or remember such information. We know they are attracted to the smell of dung, but we do not really understand how that works, or if that sense switches off when they turn their attention to the visual task of rolling a dung ball. Does their neural limitation preclude parallel processing of disparate information?

In our history of the development of contemporary science, we have seen the evolution of belief in magic, to one of stocktaking and empirical observation, to interpretation and deepening levels of sophisticated tunnelling into the smallest known particles. We have gone from myth, symbols, vague observation and interpretation of a world run by the gods, to a world with one God, and then a world in which the boundaries of religion no longer act as the limit to our knowledge.

The quest for money rather than scientific or natural interests drove much early exploration. Gold, and then trade, became the vehicles for global expansion and settlement. The knowledge we now have of how the world works comes with the recognition that so much of what there is, is threatened by the very pursuits that opened up our world.

It is an irony that cannot be lost on us as we look at the growing list of flora and fauna on the brink of destruction and extinction. The relevance to what we still do not know about creatures as small and seemingly insignificant as dung beetles is that we are beginning to understand what German naturalist and artist Maria Sibylla Merian showed in her paintings: that the world is deeply and fundamentally interconnected.

Biological evolution represents the history of a dynamic process – but evolution has its own timetable. So, even though many creatures can adapt relatively rapidly to the environmental changes we have induced, there are hundreds of thousands of species that cannot. Dung beetles are however, excellent models of rapid evolution and speciation.

The development of the magnificent horn of many dung beetles can be switched on or off in the same gene carried by males and female dung beetles, allowing natural selection – that is, chances of survival – to be balanced against sexual selection (chances of reproducing) in different habitats. The export of dung beetles to different continents, for control of dung-breeding flies, has created a massive natural experiment which will eventually reveal which way evolution will drive those species.

If we need a reminder of how much we do not know, then the study of one little sub-family of unseemly beetles is instructive. Their endless complexity and variety has absorbed the energies of so many researchers across the globe since the Egyptian Horapollo recorded the first observation of them rolling their ball “from East to West, looking himself towards the East” 3,000 years ago.

Dr Helen Lunn co-authored “The Dance of the Dung Beetles”, which is published by Wits University Press.