Technology is a product of human labour. The working class and society can therefore shape its direction. According to the International Labour Organisation (ILO), long-term technological change has created more employment than it has destroyed, and has pushed overall living standards to new levels, notwithstanding the disruption that it inevitably brings.

What’s more, the ILO concludes in a 2017 report, there’s no “clear sense that this will be otherwise in the foreseeable future”.

This includes a focus on workers.

My research focuses on the automotive manufacturing sector – South Africa’s leading manufacturing sector. The research shows that, while technology is indeed a powerful determinant of change, it is important to recognise the role that worker organisation and the state, through its industrial policy, play in shaping the direction of change.

During the same period, investment by final vehicle companies, known as original equipment manufacturers, increased from R0.8 billion in 1995 to R8.2 billion in 2017.

Figure 1 below shows the relationship between the investment and employment trends. 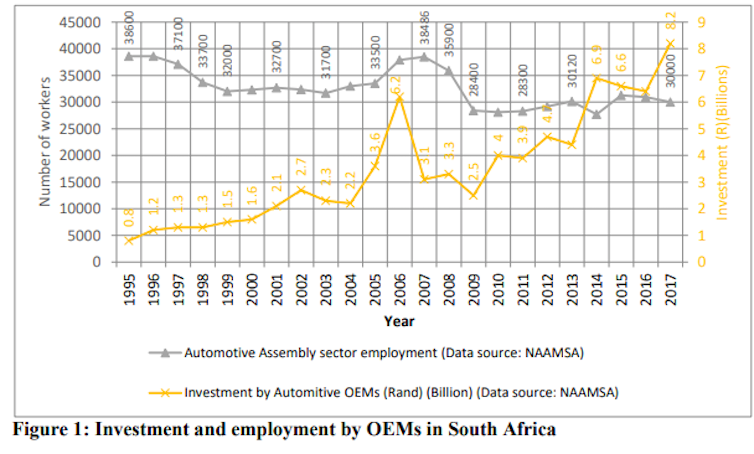 The role of the state’s industrial policy through the Motor Industry Development Programme played a key role from September 1995 to December 2012 in attracting increased investment. The plan offered incentives, including import rebate credit certificates. The incentives gave automotive exporting companies reduced import duty, or duty-free imports, on the components that they did not source locally or vehicle models they did not produce in the country.

Increased automation of production, a key part of investment by original equipment manufacturers, wasn’t introduced in isolation. With it came global production systems, new methods of work and ways of co-ordinating production, all more effective than the previous ones.

From January 2013 investment in the automotive manufacturing sector was led by the Automotive Production and Development Programme. This was made up of several incentives. These included a cash grant of 25%–30% of the value of qualifying investment for the vehicle assembly segment and 25%–35% for the components manufacturing segment, payable over three years.

The global economic crisis of 2008 badly affected investment, production and employment in original equipment manufacturers. This is reflected in Figure 1 above, and Figure 2 below.

Yet these manufacturers achieved remarkable productivity from 1995, as a result of technological change and the accompanying work reorganisation and restructuring.

During the period 1995 to 2017, they gained double the capacity of output per worker. Figure 2 below shows their total production volumes divided by their total employment. 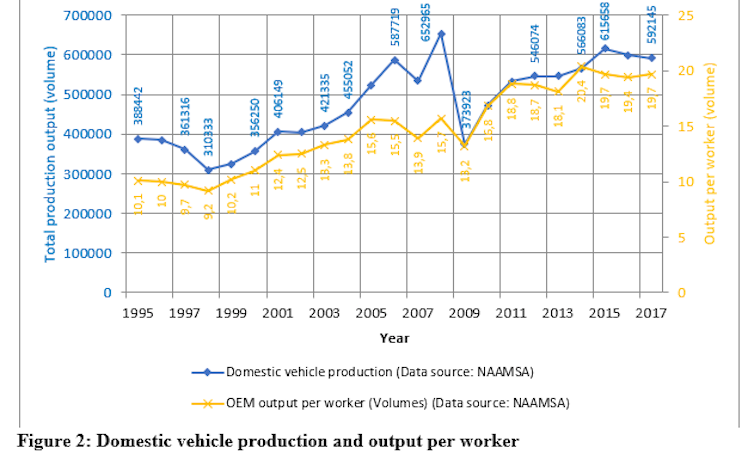 The trends presented here reflect the original equipment manufacturers’ specific reality. The research findings show that there are production conditions that, if strong enough, can counteract the reduction in the workforce, and even result in an increase in the workforce, which is important for industrial policy. This is clearly demonstrated by the case of VW, highlighted below.

About 600 robots, including the 300 new ones, were expected to complete the structure of each vehicle in a reduced time of one minute and 57 seconds.

The new robots resulted in 40 qualified fitters being declared redundant (not to speak of less skilled workers). VW served the National Union of Metalworkers of South Africa (NUMSA) with a retrenchment notice. The union challenged VW, resulting in an agreement for the retraining of the fitters as electricians. This paved the way for their jobs to be saved.

VW globally also allocated more production volumes to its Uitenhage plant. This helped save the jobs of (less skilled) production workers that could otherwise have been disrupted by the use of robots. And it resulted in an additional 300 production workers being required.

The decline in overall manufacturers’ employment from 1995 to 2017 in the context of increased capital investment and productivity underlines the necessity of increasing local production to save jobs and create additional employment. This social upgrading through the targeting of employment creation is an important industrial policy consideration and can be linked with the investment incentives given by the state.

The VW case shows that increased production localisation in global production networks can benefit employment in two important ways, despite technological disruption. Firstly, it counteracts retrenchments consequent on the way new technology is adopted. Secondly, it creates additional employment. As the role played by NUMSA at VW indicates, organised labour can shape the direction of new technology and its impact on workers.

Mohubetswane Mashilo is a post-doctoral fellow with the Southern Centre for Inequality Studies (SCIS) at the University of the Witwatersrand, Johannesburg. He has previously received funding (research stipend) from the Hans-Böckler Foundation which supported the publication in 2019 of a Working Paper that he produced, titled 'Auto Production in South Africa and Components Manufacturing in Gauteng Province', as part of the project 'Global value chains, economic and social upgrading' at the Berlin School of Economics and Law. He is a member of the African National Congress and the South African Communist Party.