Solar panels all over the Sahara desert? – Imagine newsletter #2 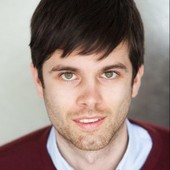 By Will de Freitas

You may have seen a variant of this meme before. A map of North Africa is shown, with a surprisingly small box somewhere in Libya or Algeria shaded in. An area of the Sahara this size, the caption will say, could power the entire world through solar energy:

Over the years various different schemes have been proposed for making this idea a reality. Though a company called Desertec caused a splash with some bold ideas a decade ago, it collapsed in 2014 and none of the other proposals to export serious amounts of electricity from the Sahara to Europe and beyond are anywhere close to being realised.

It’s still hard to store and transport that much electricity from such a remote place, for one thing, while those people who do live in the Sahara may object to their homeland being transformed into a solar superpower. In any case, turning one particular region into a global energy hub risks all sorts of geopolitical problems.

The Imagine newsletter aims to tackle these big “what if” questions, so we asked a number of academics to weigh in on the challenges of exploiting the cheapest form of electricity from perhaps the cheapest and best spot on Earth.

Imagine is a newsletter from The Conversation that presents a vision of a world acting on climate change. Drawing on the collective wisdom of academics in fields from anthropology and zoology to technology and psychology, it investigates the many ways life on Earth could be made fairer and more fulfilling by taking radical action on climate change.

You are currently reading the web version of the newsletter. Here’s the more elegant email-optimised version subscribers receive. To get Imagine delivered straight to your inbox, subscribe now.

Amin Al-Habaibeh is an engineer at Nottingham Trent University who has researched various options for Saharan solar.

He points to the sheer size and amount of sunshine the Sahara desert receives:

Global horizontal irradiation, a measure of how much solar power is received per year. Global Solar Atlas/World Bank

So even a small chunk of the desert could indeed power much of the world, in theory. But how would this be achieved?

Al-Habaibeh points to two main technologies. Both have their pros and cons. 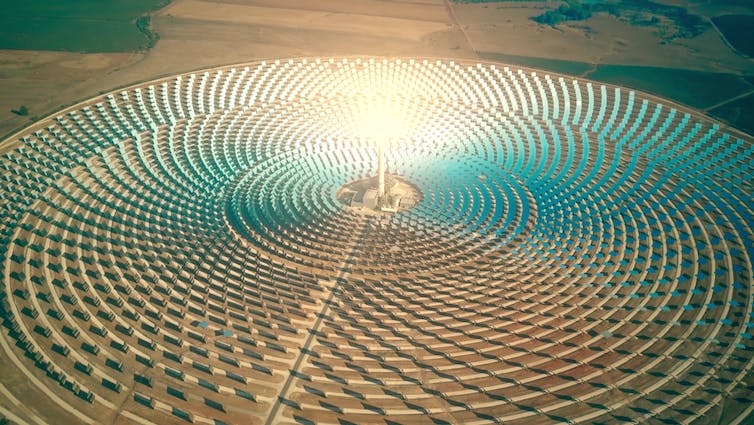 Just a small portion of the Sahara could produce as much energy as the entire continent of Africa does at present. As solar technology improves, things will only get cheaper and more efficient. The Sahara may be inhospitable for most plants and animals, but it could bring sustainable energy to life across North Africa – and beyond.

Solar panels could have remarkable impact on the desert though

Installing mass amounts of solar panels in the Sahara could also have a remarkable impact on the desert itself.

The Sahara hasn’t always been dry and sandy. Indeed, archaeologists have found traces of human societies in the middle of the desert, along with prehistoric cave paintings of Savannah animals. Along with climate records, this suggests that just a few thousand years ago the “desert” was far greener than today. 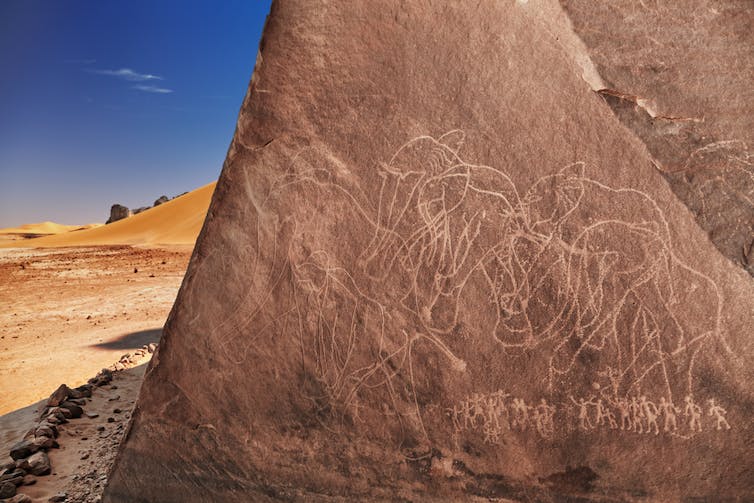 A team of scientists imagined building truly vast solar and wind farms, far larger than most countries, and simulated the impact they would have on the desert around them. They found that: 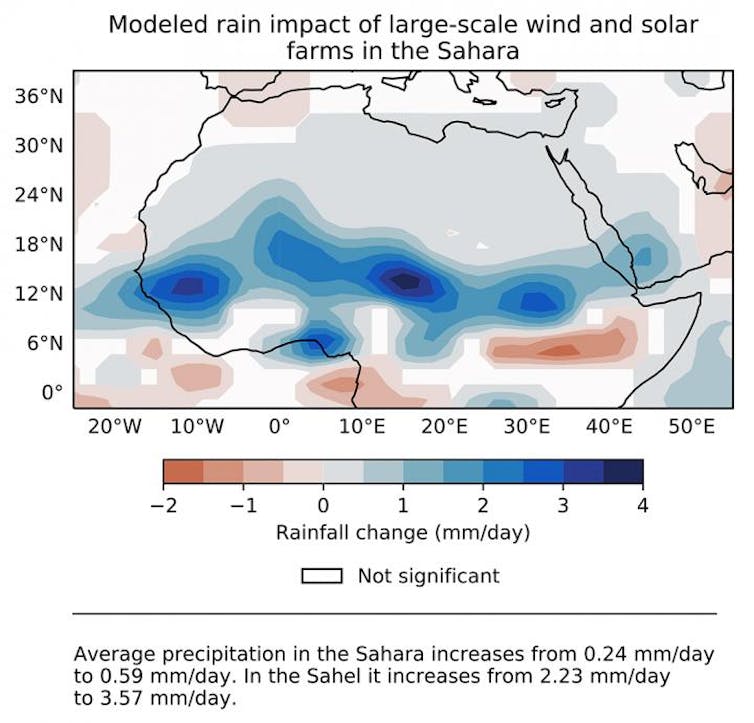 Large-scale wind and solar would mean more new rain in some areas than others. Eviatar Bach, CC BY-SA

This may be a nice side effect of a huge Saharan solar plant, but it doesn’t necessarily mean it should happen. As Armstrong points out:

These areas may be sparsely populated but people do live there, their livelihoods are there, and the landscapes are of cultural value to them. Can the land really be “grabbed” to supply energy to Europe and the Middle East? 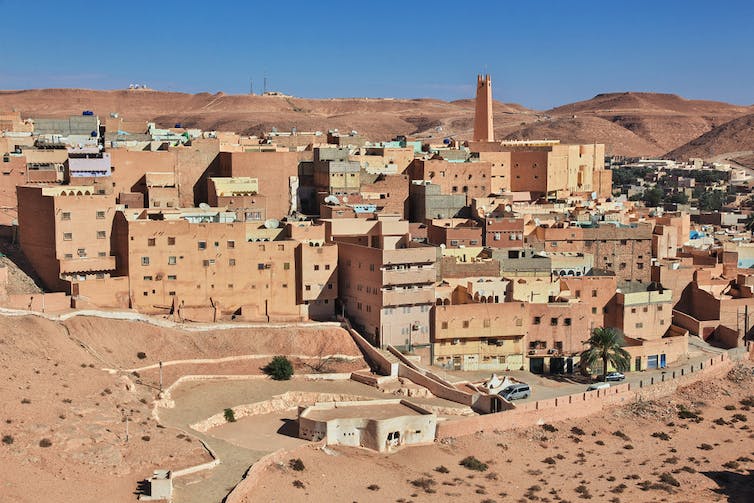 Ghardaia, Algeria. Even in the middle of the Sahara, there are settlements. Sergey-73/Shutterstock

Is this climate colonialism?

If we want to deploy millions of solar panels in the Sahara, then who is “we”? Who pays for it, who runs it and, crucially, who gets the cheap electricity?

This is what worries Olúfẹ́mi Táíwò, a philosopher who researches climate justice at Georgetown University. He mentions Saharan solar power as one of the possible policies involved in a Green New Deal, a wide-ranging plan to enact a “green transition” over the next decade.

He points out that exports of solar power could: “Exacerbate what scholars like sociologist Doreen Martinez call climate colonialism – the domination of less powerful countries and peoples through initiatives meant to slow the pace of global warming.”

What if we’re looking at the wrong desert?

All of this will be moot if Saharan solar never actually happens. And Denes Csala, a lecturer in energy systems at Lancaster University, is sceptical.

It’s true that much of the world’s best solar resources are found in the desert. Here’s a graph from his PhD research which shows how Saharan nations dominate: 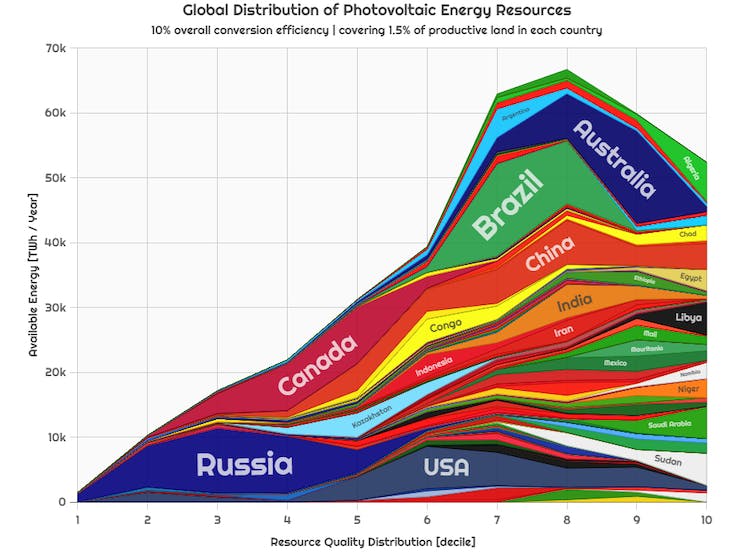 But Denes says that we’re looking at the wrong desert. In fact, the countries of the Arabian peninsula are better placed to exploit the sun. He argues several factors work in favour of Saudi Arabia, the UAE and co:

[Energy security] would be the Achilles heel of a northern African energy project: the connections to Europe would likely be the continent’s single most important critical infrastructure and, considering the stability of the region, it is unlikely that European countries would take on such a risk.

It would be fair to say academics have mixed views about the idea of mass Saharan solar. While the energy potential is obvious, and most of the necessary technology already exists, in the long run it may prove too complicated politically.

Still think this is all fantasy?

Maybe Europeans should look closer to home. The UK Planning Inspectorate is currently examining the Cleve Hill solar farm proposal in Kent, which would involve installing nearly a million solar panels across a marshland site the size of 600 football pitches. To protect against flooding, the panels would be mounted several metres in the air. If built, despite opposition from locals and conservationists, Cleve Hill would be by far the country’s largest solar farm and about the same size as Europe’s largest, near Bordeaux.

Alastair Buckley from the University of Sheffield points out the project would be groundbreaking as, unlike other ventures of this kind, it doesn’t rely on subsidies. With solar power getting ever cheaper, Cleve Hill – if it happens – seems to mark the moment when solar may start paying for itself – even far from the world’s deserts.