South Koreans are giving away their apartments and here's why 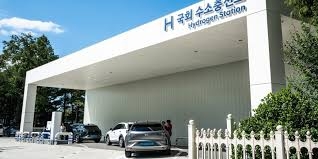 South Korea vowed to support the companies in projects that it says will serve as a milestone for its green drive.

SK Group will invest 18.5 trillion won to build facilities that can annually produce up to 30,000 tons. It plans to start supplying the gas starting in 2023 in the greater Seoul area to power 200,000 hydrogen fuel cell cars.

Meanwhile, POSCO will spend 10 trillion won to find methods of harnessing hydrogen instead of coal during steel production.

South Korea vowed to support the companies in projects that it says will serve as a milestone for its green drive.

According to Prime Minister Chung Sye-kyun, the South Korean government plans to establish a system to provide support on all phases of the companies' efforts from production and transportation to application.

SK Group plans to replace its 1,500 vehicles with Hyundai's electric ones.