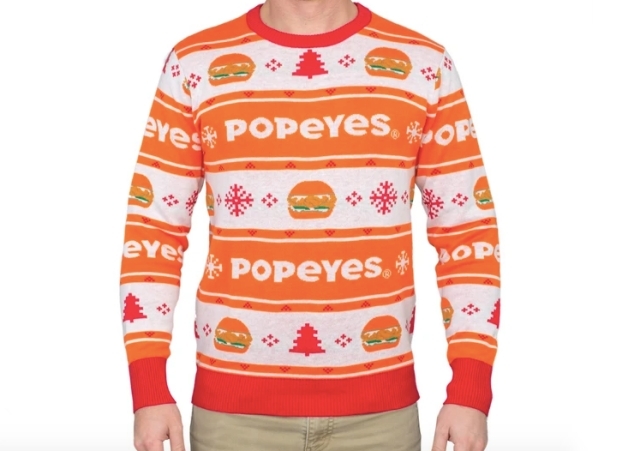 Popeyes knows what its customers want, so it is bringing back one of their favorites. The fast-food chain announced the return of its Ugly Holiday Sweater and this year. It was launched with the new holiday Beanie Hat.

Popeyes dropped this merchandise as part of its efforts to make this Christmas season more cheerful for its fans and customers. The Ugly Sweater and the beanie are going to be offered as a winter bundle.

According to QSR Magazine, Popeyes teamed up once again with UglyChristmasSweater.com to offer the cheery winter wear to customers around the country. But this is not all, since the true spirit of Christmas is about giving, the earnings for the bundle pack of the sweater and beanie will also be used for a good cause.

The profits from the sale of Popeyes merchandise bundle that is also perfect to be given as gifts will be donated to the Popeyes Foundation. This is a charitable organization that supports families and children in need.

The foundation’s main goal is to bring relief to people who need food and assistance in times of crisis and emergency situations. The Popeyes Foundation was established with this mission so it is using its fast-food brand to fulfill its commitment to help the needy.

Customers can also support the cause by buying the Popeyes Ugly Sweater and beanie package. The merchandise was released on Dec. 8 and it will be sold for $54.99. The bundle is available for sale until supplies last.

ComicBook noted that this is the third year that Popeyes has released its Christmas sweater. And just like this year, the sweaters in the first two previous years were also created and sold in partnership with UglyChristmasSweater.com. The design has not changed much and still has Popeyes official color of orange and featuring the chicken and Christmas tree design.

Meanwhile, this latest merchandise release caps off this year’s big promotions. It followed the introduction of chicken nuggets this year which was launched as part of the summer menu lineup.