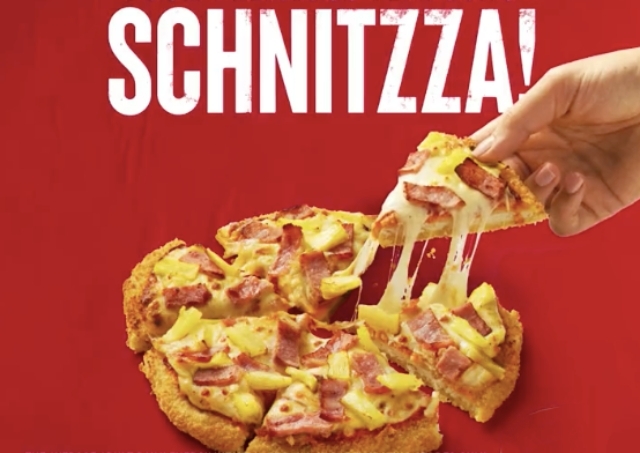 Pizza Hut Australia just unveiled its newest pizza creation, and many people are saying it is an unusual flavor. The fast-food chain released its pizza featuring the chicken schnitzel as the base.

Pizza Hut Australia is offering this new pizza that it calls the “Schnitzza,” and many agree it is not an ordinary menu. As per The Daily Mail, the creation is actually a combination of two favorites of the Australians which are the pizza and chicken parmigiana.

The Scnitzza is loaded with toppings and it is offered for only $15. Customers have four flavors to choose from and it includes the popular Hawaiian and Margherita. In addition, the BBQ Beef and Ham Schnitzza and Creamy Ham and Mushroom Schintzza are also on the menu.

It should be noted that this is not the regular pizza that everyone is familiar with but these new Schnitzza flavors are actually part pizza and past chicken parmigiana. The dough base is not the usual as it is made with chicken.

Then again, each of Pizza Hut Australia’s Schnitzzas has all the toppings of the regular pizzas. In fact, the Hawaiian still has pineapples, tomato, ham, and mozzarella cheese while the Creamy Ham and Mushroom has smoked honey ham, mushrooms, cheese, and creamy alfredo sauce as toppings. For the BBQ Beef and Ham, the crispy chicken base is covered with BBQ sauce, beef, smoked honey ham, and mozzarella cheese.

Introducing ???? the NEW Schnitzza!
Available in four flavours that are sure to make you drool. ????
Hawaiian, Creamy Ham & Mushroom, Margherita or BBQ Beef & Ham, which would you choose?
Try it now ???? https://t.co/yauTDeGj0T pic.twitter.com/X4UoZbhA4t

News.com.au reported that Pizza Hut Australia’s Schnitzza could also be purchased for delivery and this cost $18.00. Customers can also look for the discount code in the virtual “Schnittza Hut” and they can enjoy a $10 off the price. The code will only be valid until Dec. 15 so it should be used as soon as possible.

“The hotly contested debate of what schnitzel with sauce and cheese is called – be it a parmi, parmy or parma – has been put to bed at Pizza Hut,” Pizza Hut Australia’s national marketing manager, Tamsin Lysons, said regarding the new Schnitzza line. “It’s a Schnitzza. The fusion of crispy chicken schnitzel combined with delicious pizza toppings has created this year’s hottest food hybrid and we are excited to bring Aussies an iconic part of pub culture, re-imagined in pizza form.”