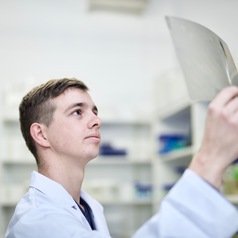 Tuberculosis (TB) is an infectious disease transmitted via droplet aerosols. Humans constantly produce aerosols, even during normal breathing. Since Mycobacterium tuberculosis was identified as the causative agent of TB, almost 150 years ago, people have assumed that coughing is the main way that infectious aerosols are generated.

Persistent cough is assumed to be the main source of TB transmission and is a defining symptom of TB. It is always listed among the key questions asked when people present with possible TB. Yet, in many cases, infection with M. tuberculosis does not lead to the development of symptomatic disease.

It’s estimated that around 1.7 billion people globally have latent TB. These are otherwise healthy people who test positive for M. tuberculosis infection. The recent South African National TB Prevalence survey, for example, reported that nearly 60% of individuals with pulmonary TB were asymptomatic. This is surprising as an estimated 10 million people worldwide still developed active TB in 2019.

Together, these observations suggest that TB is spread in the absence of coughing. As such, research focusing on coughing as a source of infectious aerosols risks underestimating the extent of TB transmission.

My colleagues and I aimed to test whether normal breathing could produce infectious aerosols. We did this by comparing the aerosolisation of M. tuberculosis and particulate matter from 39 patients with TB. We compared aerosols generated during three separate respiratory manoeuvres: tidal (normal) breathing, forced vital capacity (deep breathing), and induced cough.

For the comparison, we used the Respiratory Aerosol Sampling Chamber. This device was purpose-built to catch bioaerosols. These are droplets and particulate matter that become aerosolised during respiration. M. tuberculosis is just one example of a bioaerosol.

To detect M. tuberculosis organisms, we captured bioaerosols in liquid. These samples were concentrated, stained, and scanned based on our previously published methodology.

Our findings suggest a common mechanism of bioaerosol generation in the peripheral lung between all three manoeuvres, consistent with published data. A single cough produces around three times more M. tuberculosis than a breath. However, we estimated around 22,000 breaths per day compared to an upper limit of 550 coughs. Based on these findings, we conclude that breathing contributes more than 90% of the daily aerosolised M. tuberculosis – regardless of how often a person coughs.

Assuming the number of viable M. tuberculosis organisms detected is a way of measuring patient infectiousness, these observations imply that normal breathing contributes significantly to TB transmission. This challenges the current assumption that coughing is the primary driver of TB transmission.

What does this mean for TB control?

The disruption of TB transmission depends heavily on identifying and treating TB-positive individuals. Cough is thought to be a crucially important symptom in identifying people who are likely to spread TB.

The aerosolisation of M. tuberculosis through normal breathing suggests that TB transmission from asymptomatic individuals is possible. If this is the case, symptomatic screening for the treatment of infectious individuals may not be an efficient approach for disrupting TB transmission. Additionally, waiting for patients to attend the clinic risks continued community transmission, as delays of up to 10 weeks from symptom onset to clinic attendance are common in low-resource settings. What’s needed is bioaerosol-based diagnostics capable of identifying infectious individuals irrespective of TB symptoms.

Our findings also show how important it is to ventilate closed environments – even simply by opening windows. The frequency of tidal breathing suggests that the aerosolisation of M. tuberculosis, and potentially other airborne infectious organisms (such as SARS-CoV-2), occurs more regularly than previously suspected.