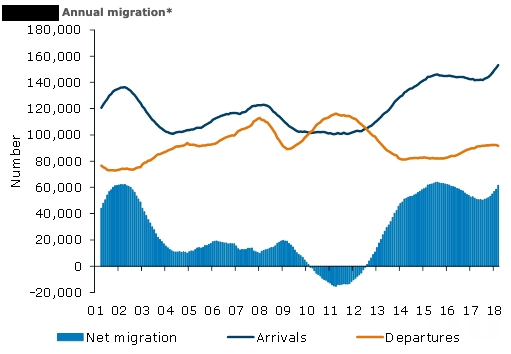 New Zealand’s migration data showed tentative signs of stabilising in Feb. But strong annual inflows seem a little out of whack with the recent slowdown in economic momentum. It appears there is still noise in these data, according to the latest report from ANZ Research.

Surprisingly, revisions to net migration data this month (a consequence of last year’s change to the outcomes-based collection methodology) didn’t change the face-value story from what last month’s data were showing. That is, the net migration cycle has turned a corner and annual inflows are trending higher.

"However, we remain sceptical. Economic momentum has slowed, and with population growth such a dominant driver of GDP growth this cycle it doesn’t make sense that the economy is slowing while the trajectory for net migration is shooting for 2016 cycle-highs," the report added.

But if this data is believed on face value, it suggests population growth accounts for more of the recent strength in private consumption growth and that rising real incomes have contributed less. And it’s not a good story from a labour productivity perspective.

In part, this lift in net migrants may turn out to be a misallocation of total people as migrants rather than short-term visitors. While short-term arrivals of overseas visitors remain at a high level (3.87m visitors over the past year), they have fallen for the third consecutive month to be down 12,000 on a three-month sum basis. Monthly arrivals for February are 16,000 less than seen in November 2018.