Hyundai Mobis to use renewable in all worksites by 2040

Ice stupas: the artificial mini glaciers bringing water to some of the driest, coldest places on Earth 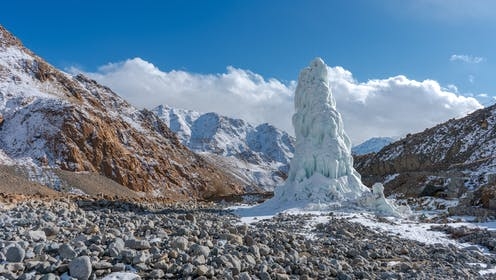 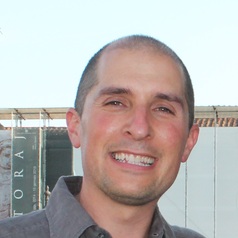 Glaciers are not just spectacular indicators of climate change as they shrink and disappear due to global warming. They are also, for many communities, an irreplaceable source of fresh water.

During the melting season in summer, a portion of mountain glacier surface releases water that is essential to the ecosystem in the valleys below, supplying vast cities – and industries – in places like South America and India.

But this meltwater is also essential to many remote rural communities for drinking water and crop irrigation. These include those living in the Ladakh Valley, a beautiful, 470km valley sandwiched between the Greater Himalayan and Karakoram mountain ranges, and home to 300,000 people up to 4000m above sea level.

These iconic ranges have an abundance of glaciers, but large areas also fall within the monsoon rain shadow zone, which means they are extremely arid, because rain is blocked by the mountains. The Ladakh Valley is one of the most arid and coldest mountain regions in the world, with annual rain and snowfall rarely exceeding 100mm – little more than the Sahara Desert – and winter temperatures as low as -30°C. 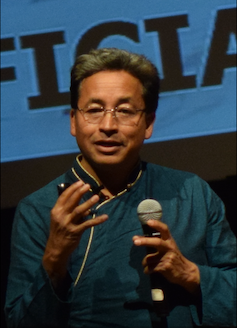 Severe water shortages are a fundamental issue for the people who live in this cold desert. Their existence relies on the success of their crops, which can only be cultivated over a few short months of the year, often irrigated by diverted glacier meltwater. However, climate change over the past decades has meant that glaciers in the region have been shrinking, or disappearing altogether at a worrying rate, thus reducing the short growing season further.

An increasingly viable solution to this problem is the construction of ice stupas – artificial glaciers built to store winter water for use in the arid months of late spring and early summer, when meltwater is scarce. Invented in 2013 by engineer Sonam Wangchuk in Ladakh, the idea is to conserve this tower of ice as long into the year as possible so that, as it melts, it feeds the fields until the real glacial meltwaters start flowing again later in the summer.

In a collaboration with Jawaharlal Nehru University in New Delhi, our Cryosphere and Climate Change research group has been conducting a study looking at 2,200 glaciers in the wider Ladakh region. We’ve found that 86% have experienced a rise in the height of the snowline of around 300m over the past 42 years. This rate has increased to almost 10m a year over the last two decades.

Combined with drier winters, this situation has led to frequent and extended droughts, which are now threatening life-sustaining crops in rural communities. Unsurprisingly, entire villages have already been abandoned, or will be soon.

The wider issues can only be resolved through the action of governments and society as a whole, so many hopes are pinned on positive outcomes from COP26. But any solutions to augment the limited, and now declining, glacier-derived meltwater could help guarantee a sustainable future for these communities.

Locally, ice stupas offer an answer, or at least a partial way to offset the effect of shrinking glaciers in the short term. Using basic and inexpensive techniques, a conical structure of wood and steel is built and then gravity, rather than electricity, is used to bring water diverted from a nearby streams during the rainy season, and sprayed this into the air like a fountain. 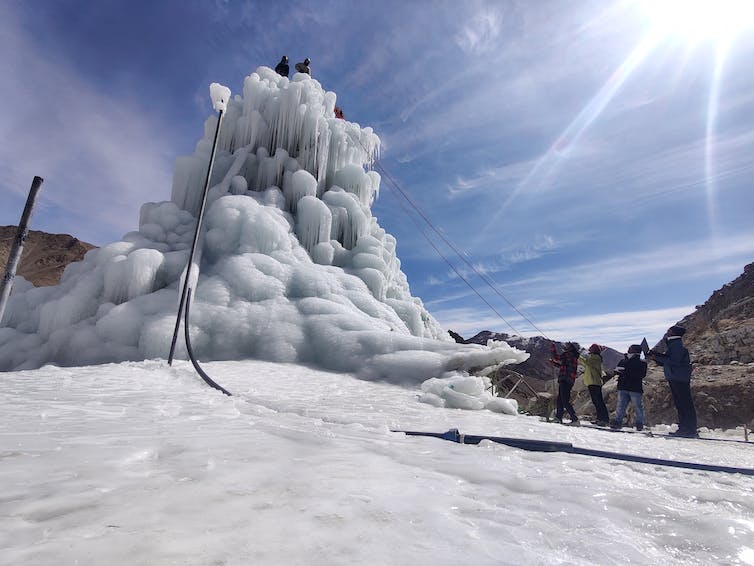 The ice is formed by shooting fountains of water up in the air during freezing periods of the winter. University of Aberdeen, Author provided

The sub-zero temperatures quickly freeze the water into the conical structure, so that a mass of ice begins to grow. The end result has the same high, narrow dome-shape typical of Buddhist shrines, hence the “stupa” part of the name, which slows down subsequent melting because the surface area exposed to the sun and warm temperatures is minimised.

When the warmer, arid growing season arrives, the lower altitude streams quickly dry up and there is little water available again until June when the glaciers provide meltwater again. It is in this crucial window that the ice stupas start melting, offering an invaluable source of water for irrigation early in the growing season, extending the cropping season by a few weeks – which makes all the difference in this extreme agricultural environment.

Constructing artificial ice reserves is not new, but in the past these were built in less efficient shapes and much higher up the mountains, making them difficult to manage. Now, these ice stupas are built next to where the water is needed most, right on the outskirts of villages, near their fields. The size and shape make them particularly efficient, inexpensive and easy to maintain, and they are able to produce millions of litres of water each year.

We’re now hoping to explore how stupas can best be used to tackle this problem. Our [project] is still in its infancy and more work is needed to improve some technical aspects. These include finding further sites both in the Ladakh region and other parts of the world, ways to avoid water freezing in the supply pipelinesm and how best to distribute water to the many villages and other users. By establishing a long-lasting collaboration with local ice stupa teams and research colleagues, we hope to provide some of the solutions.