How do you weigh a live whale? 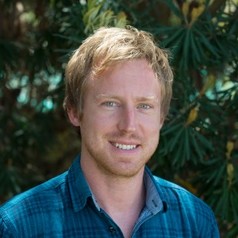 Whales are the largest animals on the planet, and important predators in the marine ecosystem. As a marine biologist I have been lucky enough to see them up close. It’s an amazing experience to watch a whale mother, 14 metres long and weighing nearly 40 tonnes, gently push her “tiny” five-metre baby, already weighing nearly one tonne at birth, up to the surface to breathe.

But how do I actually know that whale weighed 40 tonnes? After all, we can’t exactly capture an animal the size of a bus and simply put it on a scale. And swimming out into the ocean and putting a measuring tape around its body is not a very wise thing to do.

For whale scientists, this is a big problem. The sheer size of these animals is fundamental to their success, as it allows them to store enough energy to undertake long distance migrations to find food in scattered locations. But though this should be factored in, it is seldom possible to incorporate body weight as a variable when studying free-living whales as it is so difficult to measure them. 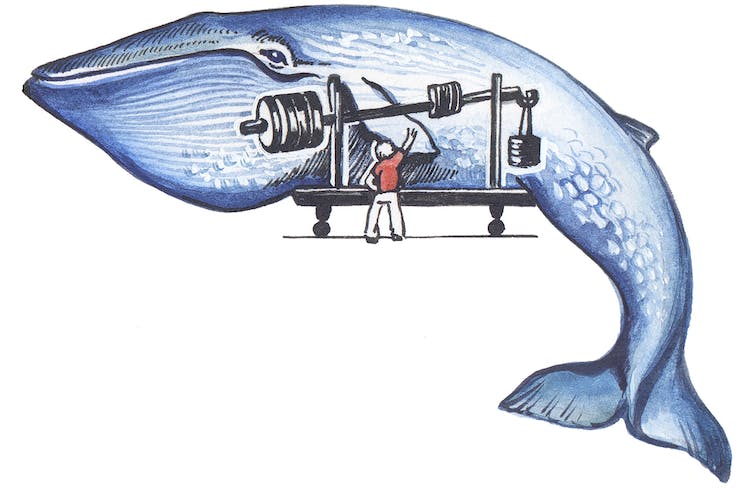 This is why we needed to develop a new non-invasive way of weighing whales. The solution colleagues and I came up with was to use a technique called photogrammetry – where the body size of the whales was measured from aerial photographs taken by drones.

We applied this technique to southern right whales in Península Valdés in Argentina. With two large round bays surrounding a central peninsula, Valdés has sheltered clear and shallow waters, which attracts lots of whales who congregate there to mate and give birth. This unusual geography also makes it a great place for researchers, as we could simply fly our drones from land and photograph lots of whales in perfect conditions very close to the shore.

You can play with the model whale here:

But volume alone doesn’t tell us the weight of these whales – we’d also need to figure out their density. For that, we had to go through old records of closely related North Pacific right whales killed by scientific whaling operations. These records noted each whale’s length and girth but also, crucially, weight.

We then used our 3D model to work out the volume of each dead whale from its length and width, which we cross-referenced with their weight in order to calculate a volume-to-weight factor – or density. This meant we could calculate the weight of the live southern right whales just from their drone measurements. The full method is now presented in the scientific journal Methods in Ecology and Evolution.

Of course this is not the first time anyone has measured the weight of a whale. Most of our early knowledge of large whale physiology comes from the whaling industry, where whales were often measured, and sometimes even weighed, as part of the industry protocol. What our method offers however, is a way to weigh the whales without having to kill them. 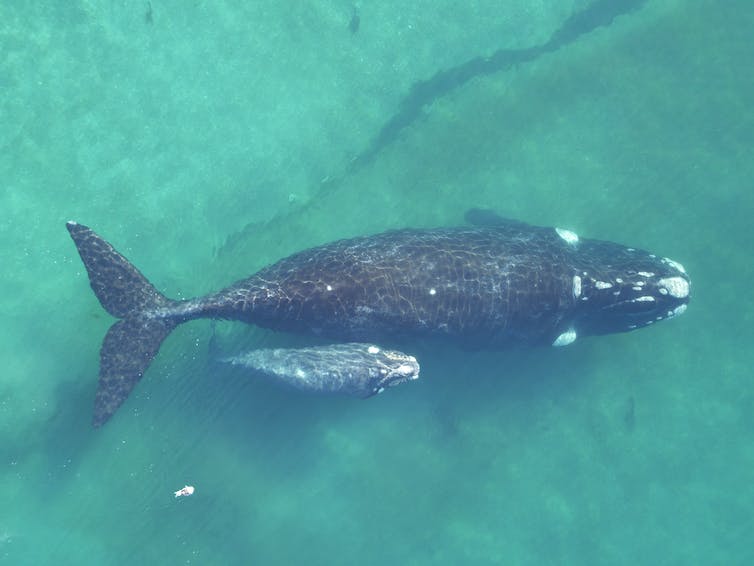 Apart from being more benign, photogrammetry makes it possible to measure the same whale over time, to study growth and changes in body condition such as fat reserves. It also allows us to sample the health of small vulnerable populations that would not be able to sustain scientific whaling. Hence, our approach opens up a new avenue of research into large whale ecology and physiology, which we believe will greatly benefit both science and the conservation of these amazing creatures.

Another study I led a few years ago showed that noise from the drone does not penetrate into the water, so we can quietly observe them from above in their natural behaviour while taking our measurements. The whales don’t even notice we are there.