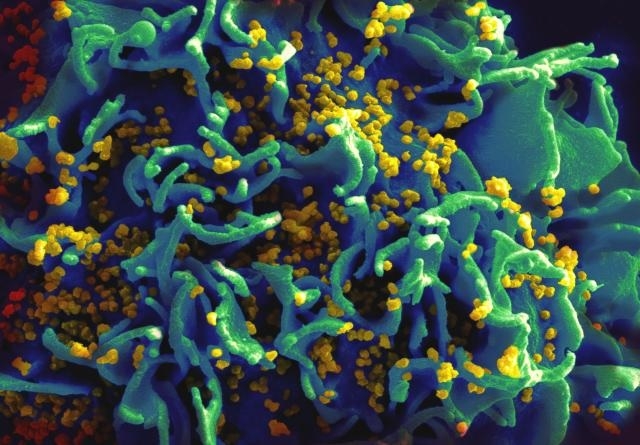 Seen in the photo is an H9 T cell infected with HIV. | Photo by NIAID via Flickr.com (licensed under CC BY 2.0)

Finding a cure that will eliminate the human immunodeficiency virus (HIV) from a patient’s body remains one of the biggest challenges in the medical science field. However, several studies have had major findings that allowed scientists to better understand HIV to eventually develop a cure for the AIDS-causing virus.

One of the latest remarkable findings was reported by researchers from the University of California San Diego School of Medicine. Their experiment helped them identify a “switch” that could be the key to avoiding the reactivation of HIV reservoirs after a patient stops taking antiretroviral treatment.

The study was published earlier this week on the medical journal mBio detailing the researchers’ investigation that used the first genome-wide expression analysis of long noncoding RNA (lncRNA) in HIV-1-infected primary monocyte-derived macrophages. The paper explains that lncRNAs do not have the same protein-encoding properties that RNAs have. However, lncRNAs in regulating which genes to turn on and off in cells.

Scientists identified a lncRNA they now call HIV-1-enhanced lncRNA (HEAL) that is “upregulated” with the presence of HIV-1 infection. They found it to be a “recently emerged gene” and responsible for the spread of HIV in immune cells.

The researchers then used several methods to silence HEAL through RNA interference processes and knocking it out completely with the CRISPR-Cas9 tool. They found that these approaches helped in preventing reactivation of dormant HIV reservoirs even after administering ART therapy, was suspended.

Will this research lead to a complete HIV cure?

Finding the “switch” to the HIV reservoirs in a patient’s body is a breakthrough. However, there is still a long way to go before this particular research leads to an actual HIV cure. The researchers noted that they have to conduct additional experiments on animal models to further observe the effects of silencing and killing HEAL.

If those yield the same positive results, people living with HIV will have better chances of leading normal lives not dependent on ART drugs. "Further studies are needed to explain the mechanism that leads to HEAL expression after an individual is infected by HIV,” co-author Dr. Tariq Rana of UC San Diego School of Medicine said (via UCSD News). “But this finding could be exploited as a therapeutic target."