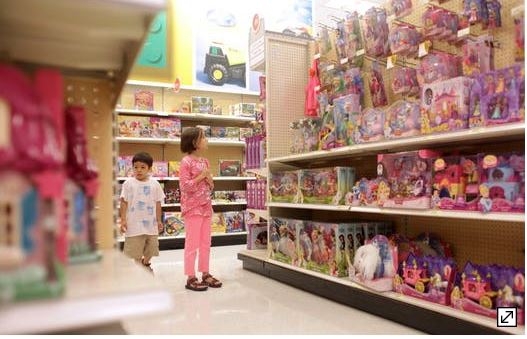 While the bill will not prohibit separate areas for girls and boys, it would mandate putting up a place where dolls and toy soldiers sit side-by-side without gender recommendation.

California is considering making gender-neutral toy aisles compulsory in its department stores, and impose fines of $250 to $500 on stores that do not comply, starting in January 2024

While the bill will not prohibit separate areas for girls and boys, it would mandate putting up a place where dolls and toy soldiers sit side-by-side without gender recommendation.

California assembly member Evan Low, who drafted the bill, said children should not be stigmatized and placed in a box by dictating what they should like based on outdated gender stereotypes.

Low added that the regulations would also apply to pacifiers and feeding equipment.

The bill would only apply to department stores that employ over 500 people.

Supporters of the bill say it would help address unjustified price differential, as products marketed to girls are often more expensive than those aimed at boys, even if the items are identical.

But those against the bill argue that the government has no business dictating stores how they should display their goods and that parents would find it easier to choose if items are clearly labeled.

The bill is set for final reading in the state's lower house, before landing on the desk of Governor Gavin Newsom.

Sensitivity to gender issues has grown in recent years across the west, and particularly in the US.

Among toymakers aiming to promote gender equality and inclusion is Hasbro, which announced that its Mr. Potato Head brand would be known simply as "Potato Head."