Game-changing resolution: whose name on the laws of physics for an expanding universe? 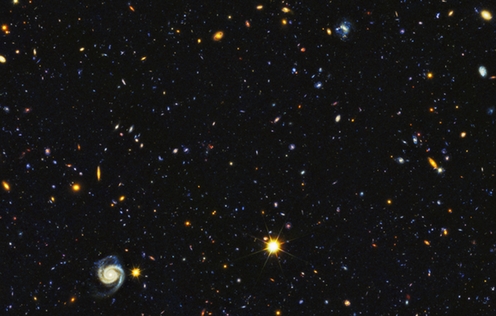 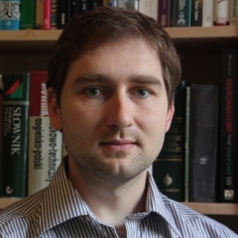 Astronomers are engaged in a lively debate over plans to rename one of the laws of physics.

It emerged overnight in Vienna at the 30th Meeting of the International Astronomical Union (IAU), in Vienna, where members of the general assembly considered a resolution on amending the name of the Hubble Law to the Hubble-Lemaître Law.

The resolution aims to credit the work of the Belgian astronomer Georges Lemaître and his contribution – along with the American astronomer Edwin Hubble – to our understanding of the expansion of the universe.

While most (but not all) members at the meeting were in favour of the resolution, it was decided to give all members of the International Astronomical Union a chance to vote. Subsequently, voting was downgraded to a straw vote and the resolution will formally be voted on by an electronic vote at a later date.

Giving all members a say via electronic voting was introduced following criticism of the IAU’s 2006 general assembly when a resolution to define a planet – that saw Pluto relegated to a dwarf-planet – was approved.

But changing the name of the Hubble Law raises the questions of who should be honoured in the naming of the laws of physics, and whether the IAU should be involved in any decision.

The expansion of the universe was one of the most mind-blowing discoveries of the 20th century.

A postage stamp printed in USA showing an image of Edwin Hubble, circa 2008. Shutterstock/catwalker

Expansion here means that the distance between galaxies in general increases with time, and it increases uniformly. It does not matter where you are and in which direction you look at, you still see a universe that is expanding.

When you really try to imagine all of this, you may end up with a headspin or even worse, as satirically depicted by Woody Allen in his movie Annie Hall.

The rate at which the universe is currently expanding is described by the Hubble Law, named after Edwin Hubble who in 1929 published an article reporting that astronomical data signify the expansion of the universe.

Hubble was not the first

In 1927, Georges Lemaître had already published an article on the expansion of the universe. His article was written in French and published in a Belgian journal. 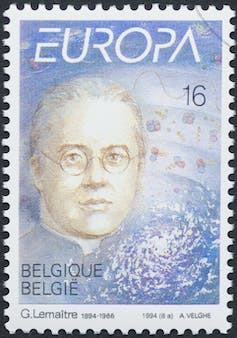 A postage stamp printed in Belgium showing an image of Georges Lemaitre, circa 1994. Shutterstock/EmDee

Lemaître presented a theoretical foundation for the expansion of the universe, and used the astronomical data (the very same data that Hubble used in his 1929 article) to infer the rate at which the universe is expanding.

In 1928 the American mathematician and physicist Howard Robertson published an article in Philosophical Magazine and Journal of Science, where he derived the formula for the expansion of the universe and inferred the rate of expansion from the same data that were used by Lemaître (a year before) and Hubble (a year after).

Robertson did not know about Lemaître’s work. Given the limited popularity of the Belgian journal in which Lemaître’s paper appeared and the French language used, it is argued his remarkable discovery went largely unnoticed at the time by the astronomical community.

But the findings published by Hubble in 1929 were most likely influenced by Lemaître. In July 1928, Lemaître and Hubble met at the 3rd meeting of the International Astronomical Union, in Leiden. During the meeting they discussed the astronomical evidence suggesting the expansion of the universe.

In January 1930 at the meeting of the Royal Astronomical Society in London, the English astronomer, physicist and mathematician Arthur Eddington raised the problem of the expansion of the universe and the lack of any theory that would satisfactory explain this phenomenon.

When Lemaître found about this, he wrote to Eddington to remind him about his 1927 paper, where he laid theoretical foundation for the expansion of the universe. Eddington invited Lemaître to republish the translation of the paper in Monthly Notices of the Royal Astronomical Society.

In the meantime, Hubble and the American astronomer Milton Humason published new results on the expansion of the universe in the Astrophysical Journal. This time the sample was larger and reaching regions more than ten times greater than before.

As a result of this change, for people not familiar with the previous papers by Lemaître or Robertson, it looked like it was Hubble who was the first one to discover the expansion of the universe.

Lemaître was apparently not concerned with with establishing priority for his original discovery. Consequently, the formula that describes the present-day expansion rate bears the name of Hubble.

The resolution of the executive committee of the IAU wants to change the name to the Hubble-Lemaître Law, to honour Lemaître and acknowledge his part in the discovery.

Naming things in the universe

The IAU was founded in 1919 and one of its activities is to standardise the naming of celestial objects and their definitions: from small asteroids, to planets and constellations.

The IAU comprises of Individual Members (more than 12,000 people from 101 countries) and National Members (79 different academies of science or national astronomical societies). The decisions made by IAU do not have any legislative power, but it does say:

The names approved by the IAU represent the consensus of professional astronomers around the world and national science academies, who as “Individual Members” and “National Members”, respectively, adhere to the guidelines of the International Astronomical Union.

It is thus reasonable to expect that if the resolution is passed then with time the new name will become more widely used.

This resolution has serious implications. It seeks to acknowledge Lemaître for his involvement in one of the most fundamental discoveries on the behaviour of our universe. At the same time, the resolution may set a precedent for future actions.

Will this initiate further changes? Will other disciplines follow the example set by astronomers?

Science is full of laws, effects, equations and constants that in many cases do not bear the name of their rightful discoverers. Some people worry that giving the due credit in all of such cases will cost a lot of effort and time.

Others will welcome this precedent and eagerly await when, for example, Henrietta Swan Leavitt will finally be properly acknowledged for the discovery of the period-luminosity relation.

For now, we have to wait for the result of the electronic voting. 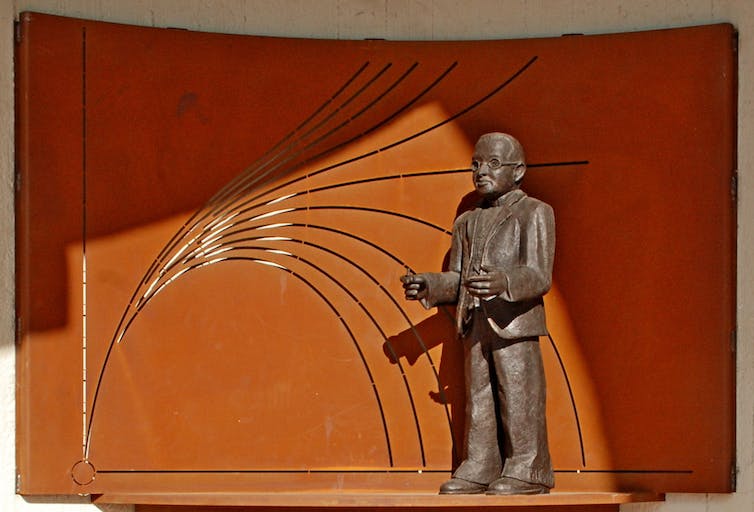 A monument in Belgium to Georges Lemaitre showing his idea of an expanding universe. Wikimedia/EmDee, CC BY-SA