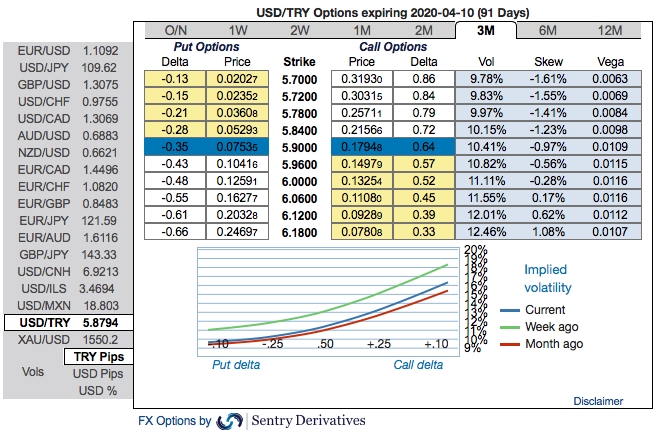 We stated in our earlier posts USDTRY has been creeping ever closer to the 6.00 mark through holiday season.

But the Turkish lira rallied sharply yesterday on multiple supportive developments, the key reasons being:

1) Risk sentiment rebounded around emerging markets as tension between the US and Iran appeared to cool down.

2) Risk perceptions surrounding Turkey especially benefitted as President Tayyip Erdogan concluded positive meetings with Russian President Putin and offered to play an ambassadorial role in US-Iran dialogue. This makes it less likely that Turkey's own disputes with the US will be the focus of markets in the near-term.

3) Finally, Turkish Treasury and Finance Minister Berat Albayrak informed the media that the economy had grown very strongly in Q4, in the 5% region. This raised hopes about the economic outlook.

If Albayrak's guidance proves correct -- there is no guarantee: his year-end CPI guidance for 2019 was off by a whopping 4pp -- this would imply around 1.8%q/q increase in GDP for Q4. Q3 was an especially weak 0.4%q/q; this strong Q4 increase would be coming after a year of very depressed economic conditions -- therefore, a strong number in Q4 alone would not imply smooth sailing for the quarters ahead.

The lira is a volatile currency: after a fortnight of negative geo-political and CPI developments, which led to a scary jump in USDTRY from 5.75 to 5.97, we can expect a sharp correction when better news returns -- however, the trend still looks weak.

We maintain a cautious stance as interest rates are being cut even while inflation is accelerating and the real interest rate is about to turn negative. It is likely to get a support at 5.7979 levels. To what extent this is the result of low liquidity and to what extent it is the future ‘trend’ will be clear soon after market participants return from holiday.

We have long held the view that USDTRY would rise sharply during the next EM risk off episode – the reason for such a view is the asymmetric reaction function of the central bank, which can only cut rates but not hike them; this alone is a sufficient condition for the lira to weaken significantly in the medium-term.

On hedging grounds, capitalizing on prevailing price dips, deploy 2m USDTRY debit call spreads with a view to arresting momentary downside risks and upside risks in the major trend. At spot reference: 5.8795 level, initiated 2m 5.50/6.24 call spreads at net debit. One achieve hedging objective as the deep in the money call option with a very strong delta will move in tandem with the underlying spikes.

It seems that hedgers of TRY are positioned for the upside risks on the above fundamental factors. The positive skewness 2m IVs are indicating upside risks, bids for OTM call strikes upto 5.98 levels indicates bias for bullish risks (refer above chart).

IVs of this underlying pair is also on the higher side, trending highest among the G20 FX space. Call options with a higher IVs cost more, because, increasing IV is conducive for the option holder, just for an intuition that the higher likelihood of the market ‘swinging’ in holder’s favour. Courtesy: Sentry & Commerzbank