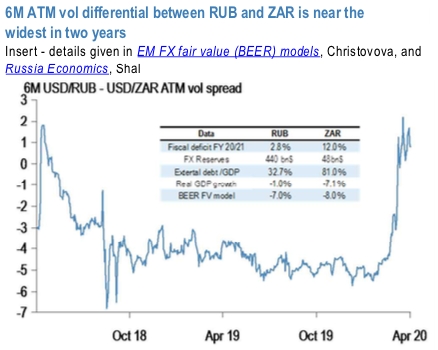 RUB vs ZAR is one pocket of EM vega where we feel comfortable considering an RV. Namely, on the back of the recent oil collapse 6M ATM vol differential between RUB and ZAR shot up to near the widest in two years.

We’ve already noted that one week after Moody’s rating downgrade the rating agency Fitch has further downgraded its sovereign rating for South Africa, now taking it to two steps below investment grade, and has also given it a negative rating outlook As a result USD-ZAR reached a new high at 19.30. However, the rand recovered intraday on a wave of risk-on as a result of positive news regarding the corona pandemic from some regions.

The oil price freshly gained yesterday but struggling again today after brief rallies, with brent reaching almost the $20/bbl mark in the recent past amidst fresh risk-off movements which drove most EM currencies weaker against the dollar. The broad-based weakening of emerging market currencies in recent weeks may sometimes make it difficult to observe any fundamental patterns.

With the potential for a resolution on the OPEC / Russia production side RUB vega could come under pressure. Also, the vol backdrop is a stark contrast to the recent spot dynamics. One-month lookback indicates comparable moves in the spot market with ZAR losing about 19% of its value and RUB 17%, while during the same period the 6M ATM spread has gone from -4/5 handle to +1vol now.

Also, our analysts see the fiscal and economic position of Russia is to be much stronger than that of South Africa (refer above chart).