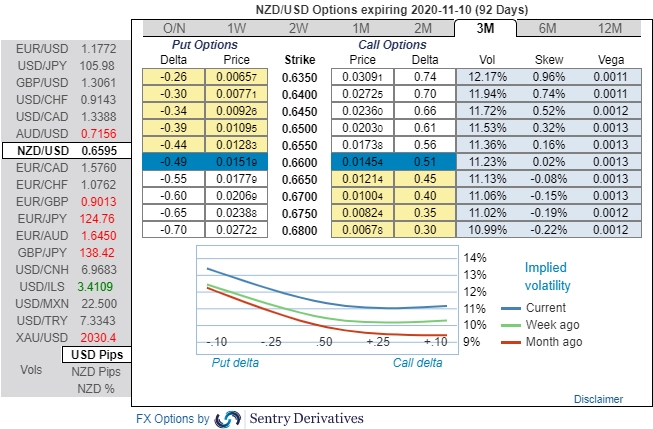 NZDUSD seems edgy now below 0.6618 as RBNZ is scheduled for their monetary policy for the day, we expect Kiwis central banker to aim to keep the stance of monetary policy unchanged at this MPS. There have been both positive and negative developments recently, and the overall balance has been roughly neutral so far as monetary policy is concerned. – The OCR will remain at 0.25%, and the RBNZ will likely reiterate its commit to keeping it there until at least March 2021.

NZD February OIS is a good tactical pay here at around 0.14/0.145% ahead of the August MPS on Wednesday, looking for a snap higher on the reiteration of earlier forward guidance.

February OIS has been drifting higher in recent days, along with the rest of the curve. But it’s still pricing in more than 40% odds of a 25bp cut, flying in the face of the RBNZ’s commitment (made on 16th March) to leave the OCR on hold “for at least the next 12 months”.

We see the risk of OCR cuts in 2021 as non-trivial given longer-term economic challenges, Governor Orr’s apparent like of them, and the RBNZ’s request that banks be ready (from a systems perspective) by December 1st. In that regard, we have little quarrel with an inverted OIS curve.

NZDUSD has been consolidating from the last couple of weeks, but for now, rallies seem to be exhausted upon overbought pressures. Anytime bearish swings may resume; hence, we are advocating below derivatives strategies on hedging grounds.

Let’s now quickly glance through OTC updates before deep diving into the strategic frameworks of NZDUSD. The pair is showing higher IVs among G10 FX bloc (3m IVs are in between 10.99 – 12.17%).

The skewness of 3m IVs still signals extreme downside risks, bids for OTM put strikes are quite visible (up to 0.64 for these tenors, refer above chart). Based on above-mentioned fundamental factors and OTC outlook, diagonal debit put spreads are advocated on RBNZ’s post monetary policy effects, the strategy is designed to mitigate the downside risks with a reduced cost of trading.

The execution: Short 1m (1.5%) OTM put option with positive theta (position seems good even if the underlying spot goes either sideways or spikes mildly), simultaneously, add long in 2 lots of delta long in 3m (1%) ITM -0.79 delta put options capitalizing on the minor upswings in the short-run.