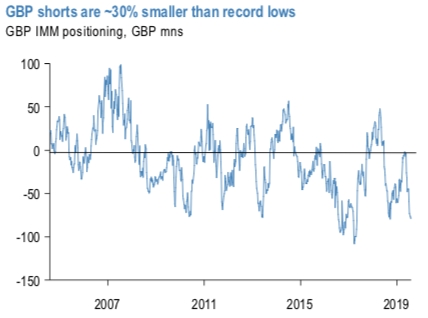 Sterling slides as fears grow of a no-deal Brexit, the September-October period will see the focus on Brexit ramped up, as we approach the latest cliff-edge date of October 31stfor the UK’s departure from the EU. With no clarity on the issue, the post-Brexit referendum lows for sterling of 93p against the euro and $1.20 versus the dollar could be tested by nervous traders, if fears continue to grow of a no-deal Brexit.

We have been recommending GBP shorts in spot expressed vs USD and JPY which have served us well thus far against this backdrop. We recommend taking profits on these trades, not because we think prospects for GBP have improved but rather because valuations on the broad index are approaching record lows.

However, further weakening can certainly not be ruled out—Boris Johnson’s rhetoric is unlikely to soften in the near-term and as noted last week, investor shorts still ~30% smaller than their post-Brexit extremes (refer above chart). Hence we think it prudent to roll short GBP exposure into limited downside 30d/10d cable put spread.

In terms of various outcomes for Brexit scenarios, in our previous publications, we have conservatively put cable at 1.15 in a no-deal, but it could just as easily be another 10% lower (EURUSD is likely to be 3-5% weaker in such a scenario). Of the other scenarios, we see GBPUSD in the high 1.20s/very low 1.30s if the UK still manages to exit under the terms of the current withdrawal agreement. A general election remains a wildcard and could see GBPUSD under current levels (so sub-1.20 most likely) if the Tories are returned with a hard-Brexit mandate, or the 1.30 region if a Labour coalition is able to deliver a softish Brexit but with the offsetting risk of hard-left macro policies and the possibility of a second Scottish referendum. A second Brexit referendum would be a choice between the high teens on a second leave vote or 1.40 on a reversal to stay (we strongly reject the suggestion GBP could return to pre-referendum levels given the intervening damage done to the economy and the UK’s political credibility).

Finally, continued political paralysis and a lengthy extension to Article 50 would probably condemn GBP to drift in the mid- to low 1.20s.