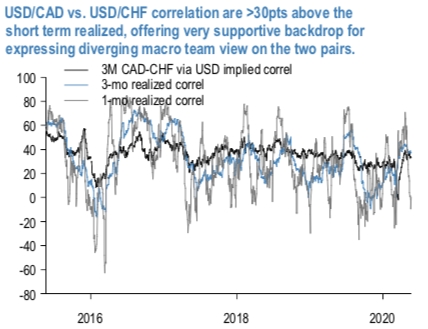 FX vols underwent through a bi-modal pattern since late February, rising sharply until around March 20th and dropping almost as steadily since then. The rise was associated with the “shock” component linked to the most acute phase of the COVID-19 crisis. Current valuations appear to be benignly pricing the economic follow-up to the health crisis. VXY-G10 pricing is less than 3vol pts from the mid-February all-time low.

The clear directionality as displayed by the FX market at the peak of the COVID-19 crisis has gradually started to wane over the past few weeks. The USD performance was rather mixed. Proxies of spot/volatility correlations, related to pricing of long USD risk-reversals indicate that implied levels are just starting to drop. A similar picture emerges when looking at the average USD/G10 correlations which have started to come down more markedly.

Meanwhile, feeding the interest in de-correlation opportunities price targets from our macro team indicate a lack of a strong, broad-based, directional pull.

One such example is USDCHF vs USDCAD where our analysts remains bearish on CAD, with a target of a 5% drop by Sept but see CHF as the best-rated currency based on an aggregated measure of QE vulnerabilities. Level of 3M implied correlation at around 35% is by our own admission not particularly impressive; still, it offers a solid buffer for cheapening de-correlation structures. 1m realized correlations (0%), so that the time span is excluding the March high-volatility period, point to more than 30 correlation points of premium.

Given the drier liquidity of correlation swaps, especially with such low levels of implied correlations, and the interest of mapping a macro view on deltas via derivatives, we opt for the implementation via dual-digitals.