FxWirePro: GBP/NZD neutral in the near-term, scope for downward resumption 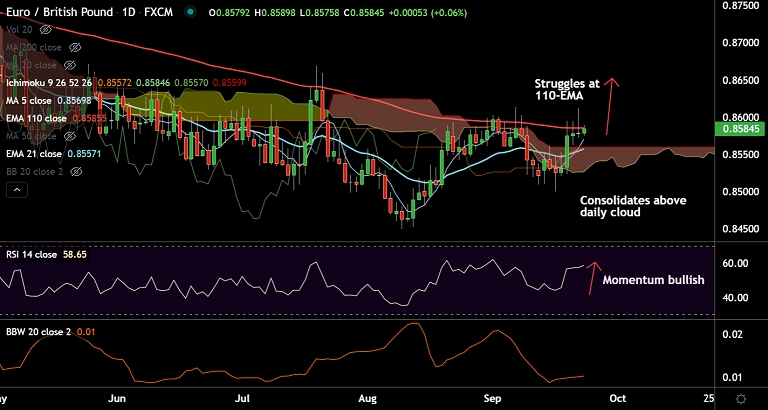 The Eurozone Manufacturing purchasing managers index (PMI) prints at a 7-month low of 58.7 in September vs. 60.3 expectations and 61.4 last.

The Bloc’s Services PMI drops to 56.3 in September vs. 58.5 expected, data released by IHS/Markit research showed on Thursday.

Further, German manufacturing sector sharply slows its pace of expansion in September. German Manufacturing PMI arrives at 58.5 vs. 61.5 expected, while Services PMI eases to 56.0 vs. 60.2 expected.

Composite Output Index arrived at 53.3 in September vs. 62.2 expected and August’s 60.0, its lowest levels in seven months.

The single currency depressed after weaker-than-expected PMIs across the eurozone.

- Momentum is bullish. Stochs are biased higher and RSI holds above the 50 mark

Summary: EUR/GBP technical bias is bullish. But the pair is capped at 110-EMA resistance. Watch out for decisive break above for further gains. On the flipside, retrace below cloud will see downside resumption.