FxWirePro: A Run Through on LatAm FX-bloc 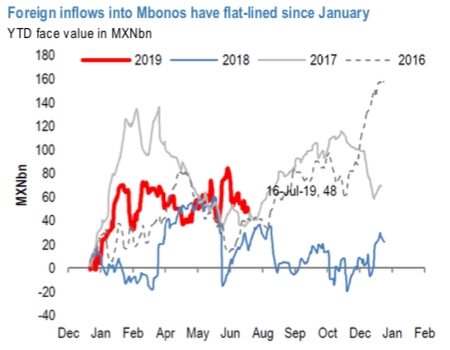 We also stay long BRL and short MXN, both of which have shown more resilience to external conditions. Reform optimism continues to support BRL, and Brazil- watchers (as well as FinMin Guedes) have shifted their focus to tax reform and the continuation of the privatization process.

Furthermore, the BCB has resumed its easing cycle, supporting the equity and bond markets even though this has also lowered the BRL's implied 3m yield to 5% (from about 5.50% in June).

MXN, on the other hand, continues to rely on its high carry, particularly given the poor outlook for its equity market as growth has stalled and manufacturing showing signs of contraction. Bond portfolio flows have also continued to stall since January (refer above chart). The market’s prospects for Banxico to ease policy rates have increased with the expectation of Fed’s cut (against our economic team’s call for the first cut in 1Q20); the TIIE rates market prices 50bp of cuts within 6m. In the event that Banxico were to cut rates (not our economic team base case) we believe that it would not meaningfully affect MXN, at least for the first cut, which is why we keep our RKO = 20.20 structure.

First, Banxico has taken a very cautious approach to the monetary policy given the multiple macro risks facing the economy (Pemex, the administration’s fiscal stance, high foreign ownership of bonds) as well as the fact that inflation expectations remain above their 3% target. (Median expectations for 12m ahead core inflation stayed at 3.49% in July).

We, therefore, suspect that it would be mindful of its potential impact on MXN, as well as financial conditions, and hold off cutting rates if MXN were to weaken.

Second, other central banks globally have already pre-empted Banxico and eased policy rates. The BCB is the latest such example in the region. Relative monetary policy rate differentials to other EMs matter insofar as EM investors are still likely to position in one of the highest carry-to-vol currencies. We, therefore, find it unlikely that those investors who are long MXN for carry would unwind their positions for this reason alone. Courtesy: JPM