A Run Through on Asian FX-Bloc And Derivatives Strategies 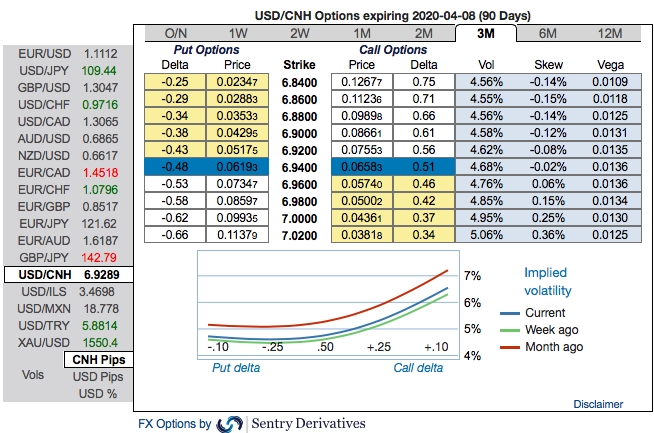 Yesterday, Asia was poised for a muted open given the relatively calm price action in the G7 markets. This calm was decisively shattered as news filtered through that Iran launched a missile attack on an Iraq base hosting US troops. The tone shifted to risk-off and a dash to safety. Asian currencies sold off, JPY strengthened, and oil and gold rallied. A news agency report that President Trump could address the nation exacerbated the risk-off tone on fears that tensions will merely be dialed up. The White House subsequently said that President Trump will not address the nation and this provided a reprieve for the markets. It provided a breather for the markets on the perception of a measured response from the administration. However, this reprieve may be short-lived.

The price action in Asian currencies reflected this dynamics. For instance, USDKRW shot up over 1% towards 1,180 at the open but subsequently pared back gains to the 1,170 level. The twin deficit currencies in Asian remain the most vulnerable given the upside risks to oil prices, such as IDR and INR. For USDCNY, it opened without any fanfare and held steady around 6.9500. PBOC’s mid-point fix was set just a touch higher than our projection at 6.9450, suggesting adjustment from the central back. The stability in USDCNY is helping to mitigate the sell-off in other Asian currencies but this is also subject to change. On China, we are watching two main events near term, namely 1) the monthly data set for December due in the coming week and starting with inflation remained higher at 8%; and 2) details of the phase one trade deal ahead of the 15-January date for the two sides to sign the deal.

While the Indian rupee (INR) fell over 0.6% vs the USD last Friday to 71.80 in reaction to higher oil prices. It was the third weakest performance among Asian currencies last Friday, behind only the Korean won (KRW) and the Philippines peso (PHP). It is a stark reminder of the vulnerability of Asian currencies to higher oil prices given that Asia in general is a net oil importer.

1) USD call calendar spreads: In addition to the above-stated geopolitical factors, the net positive theta profile of the calendar spread is consistent with our view, the run-up to the Phase I US/China trade deal is likely to be more reliably characterized by lower FX volatility than a full-throated embrace of carry trades, and allows us to better wear the long TWD/KRW cash position in the EM Asia portfolio that is bleeding negative carry at the current levels of FX implied yields.

2) With USDCNY still in the broad for 7.05 – 7.10 range at any time, options markets are still bidding such upside risk possibilities. The positively skewed IVs of 3m tenors indicate that the upside risks of USDCNH are foreseen, bids for OTM calls upto 7.02 levels substantiate the bullish risks (refer above exhibit).

Hence, at this juncture, we uphold our shorts in CNH on hedging grounds via 5-month (7.00/7.15) debit call spread. If the scenario outlined above unfolds, we will re-assess our stance but at the moment there are no changes to our CNH recommendations. Courtesy: Sentry, JPM & Commerzbank