Election tip: 23.9% is a meaningless figure, ignore the tax-to-GDP ratio 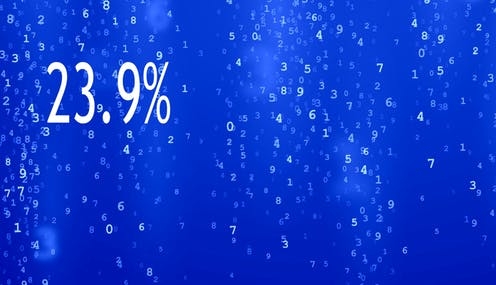 It'd be wise not to get too bamboozled by figures when watching the leaders' debates, especially this one. Shutterstock

Expect to hear a lot about tax during the coming leaders’ debates.

Which is why it’s important to get two things straight.

The first is that you can’t argue against a tax by pointing out that it will take money from people.

By all means, use that as an argument against taxes in general. It’s true – taxes take money from people. But to oppose better taxing capital gains or tightening up on dividend imputation refunds because they will take money from people is to leave unexplored the more important question of whether those particular tax measures are better or worse than the alternatives.

You can’t escape that question by just saying that all taxes are bad – that we ought to collect less. For any amount of tax collected, the next most important question is the way in which it is collected.

Low tax and high spending can be the same thing

And the second thing we ought to get straight is that talk about one side of politics being “low tax” and the other being “high tax” tells us next to nothing.

To see this, consider Bill Shorten’s childcare policy announced on Sunday. Labor has promised to spend A$1 billion a year in subsidies to cut the cost of childcare for every family with a combined income of up to $175,000 and to make it free for working families earning up to $69,000.

But what if, instead of subsidies, it had promised to deliver the $1 billion via tax rebates, to be paid to parents on proof of their use of childcare?

The effect would be same, although the method of payment would be more complicated.

It’s okay. You’re not expected to know. The answer varies from case to case. The point is that it is silly to claim that tax cuts are good and government spending is bad when in many cases each could be easily classified as the other.

The signature measure in the April budget is a case in point. It’s a tax offset of up to $1,080 per person to be paid out with tax returns after July 1. It’ll push billions into the economy, just as the Rudd government’s cash bonuses during the global financial crisis did. But Rudd’s payments were categorised as spending; these payments will be categorised as tax cuts, which means they will keep down the tax-to-GDP ratio.

Which means it is silly to talk about the tax-to-GDP ratio, as the government insists on doing.

That speed limit, where did it come from?

The Coalition has hardened the tax-to-GDP ratio into a target. As treasurer, Scott Morrison spoke last year of “a speed limit on taxes in our budgets, that requires that taxes do not grow beyond 23.9% of our economy”.

Why 23.9%? Well, in the Coalition’s first budgets it wasn’t a target at all, merely an operating assumption used by the treasury for long-term forecasting. As it explained in the 2017 budget papers:

A tax-to-GDP “cap” assumption is adopted for technical purposes and does not represent a government policy or target. It is based on the average tax-to-GDP ratio over the period from the introduction of the GST and to just prior to the global financial crisis.

Treasurer Josh Frydenberg and Finance Minister Mathias Cormann have begun talking about 23.9% as if it’s a commitment, a pledge, even though even though it would be hard to keep if the economy picked up (and probably unwise to keep), and even though it is fairly meaningless given the ease with which changes in spending can be classified as changes in tax and the other way around.

Treasury makes pretty clear what it thinks about the measure in the back of Budget Paper 1. That’s where it sets out the history of the important budget measures and its forecasts for the future. You won’t find the tax-to-GDP ratio in the first two tables. Instead, it details “revenue to GDP”, which is a much more relevant measure because it includes income from all sources – fees as well as taxes, and income from Future Fund earnings which are revenue too.

Early in his time as time as shadow treasurer, Labor’s Chris Bowen bought into tax-to-GDP debate, challenging the Coalition to keep the ratio below such and such per cent. He isn’t doing so now.