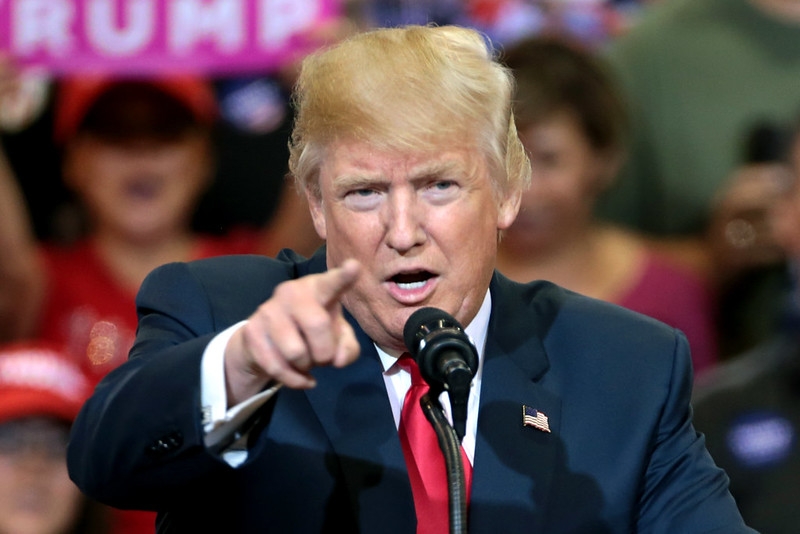 President Donald Trump shared a series of social media posts over the weekend that contained personal insults and sexist taunts targeting female Democrats. One tweet called Hillary Clinton a “skank,” another mocked the appearance of Stacey Abrams while another suggested that Nancy Pelosi’s mouth should be taped.

Donald Trump shared eight tweets from John K Stahl, who is known for his actively posting “right-wing tropes against Democrats” in his Twitter account, according to Independent. In one tweet, Stahl called former vice president Biden as “Malarkey the Racist” and former Secretary of State Hillary Clinton as “Skank.”

“When I see 1 of those polls that has Malarkey the Racist up 6-8 points everywhere, I’m thinking they must have called the same 1,000 people from 2016 that said HRC the Skank was up 6-8 %,” Stahl wrote, which was retweeted by Donald Trump on Sunday.

Stahl also mocked the appearance of 2018 gubernatorial nominee Stacey Abrams by posting her picture on social media. “We just got a look at the official portrait for the self-proclaimed Governor of Georgia. She fought a tough race, kissed a lot of babies, and visited every buffet restaurant in the State. Joe will be a racist if he doesn’t pick her,” Stahl captioned the photo, which was retweeted by Donald Trump, according to Daily Mail.

Stahl also attacked Speaker of the House Nancy Pelosi by posting two edited photos. On one picture, she was shown wearing a Trump 2020 face mask while she was shown with duct tape over her mouth in the other photo.

“To protect PolyGrip during this pandemic, we have developed 2 options. With the DJT option, she will be able to tongue and adjust her dentures more easily. With duct tape, she won't be able to drink booze on the job as much,” Stahl captioned the post, which was shared by Donald Trump.

It was a busy weekend for Donald Trump and his political opponents on social media. Aside from retweets, the POTUS also directly attacked Joe Biden and Barack Obama after the former vice president criticized Trump for playing golf while the nation is still dealing with the coronavirus threat.

“What they didn't say is that it's the first time I've played golf in almost 3 months, that Biden was constantly vacationing, relaxing & making shady deals with other countries, & that Barack was always playing golf, doing much of his traveling in a fume spewing 747 to play golf in Hawaii - Once even teeing off immediately after announcing the gruesome death of a great young man by ISIS!” Trump tweeted on Sunday.