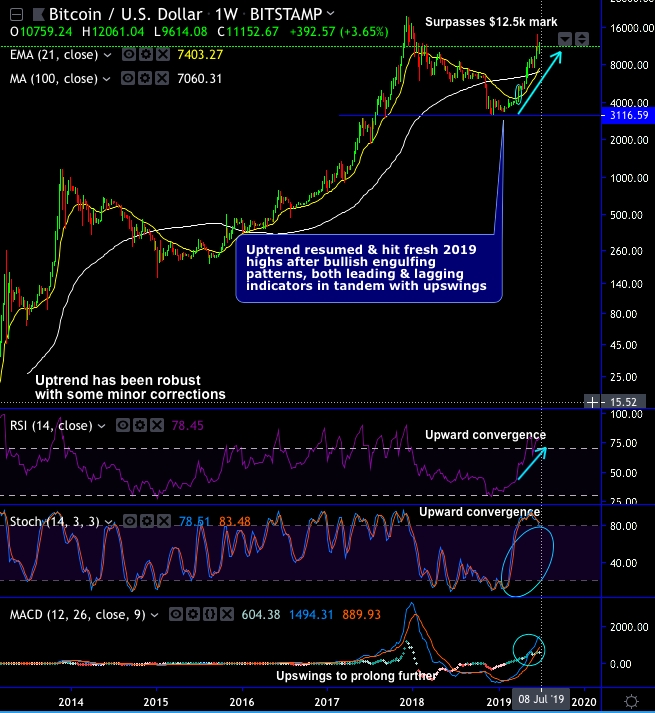 You believe it at face value or after in-depth research, unlike some speculative rallies, the trend of any asset class doesn’t last longer without the robust underlying factors, and so is the bitcoin price rally since its inception.

The underlying price of BTCUSD has been showing two-way price action, it has jumped from the lows of $3122 to the recent highs of $13,880 levels in just 6 months or so (i.e. rallies of 340% as stated in our posts). From there, the pair has tumbled back below $10k areas, tested strong supports at $9,614 levels (i.e. 7-DMAs, refer weekly plotting).

Contemplating the current price action, let’s just quickly glance at the geopolitical surface that is prevalent: President Trump stances seem to be tougher to empathize. He has been complaining that China exaggeratedly adopted currency devaluation mechanism for the Chinese Renminbi to gain an unfair competitive advantage, which happened yesterday evening again as he tweeted to accuse China of currency manipulation.

This is understandable as the trade deficit of the US widened in May. The rising trade deficit and debt in the United States have indeed caused an apprehensive surrounding among the FX avenues. Nevertheless, every time he threatens to impose tariffs on Chinese goods to narrow the trade deficit of the US, the Chinese currency always depreciates, which, again, Mr. Trump is unlikely to be happy with either. Will a tariff help Trump to achieve his two goals? One is to reduce the US trade deficits, and the other is to force China to strengthen the renminbi. More or so, we believe a lot of people share the same doubt, which somewhat helps explain the sideways movement of USDCNY.

Donald Trump appeared to be a stubborn contender of ebbing the dollar value with an objective of remaining in the racing track with other nations was quite visible in his tweet, “China and Europe playing big currency manipulation game and pumping money into their system in order to compete with the USA. We should MATCH, or continue being the dummies who sit back and politely watch as other countries continue to play their games – as they have for many years.”

Hence, the manipulation in currency mechanism is a common phenomenon through which the Central Banks deals in foreign currencies for normalizing their respective economies. Trump now reckons that the robustness of USD instigating rising trade deficit.

During the previous economic recession, like the debt market bubble and the precious metal markets were unimaginably/artificially controlled by the set of people who issue currency with the unnatural intention of keeping a check on gold’s rising prices in front of USD.

Under such a circumstance, Some WallStreet players like, JP Morgan, Fidelity, Facebook and so on, came up with their crypto-project plans that appear to have reinstated the conviction for the decentralized cryptocurrencies, specifically Bitcoin as more than 2.3 billion Facebook users will be introduced to cryptocurrencies. As cryptocurrencies having all the potential properties of preventing currency manipulations from the federal system, the pioneer cryptocurrency (bitcoin) and its major peers are criticized harshly.

Hence, Trump and company reportedly might have instructed Facebook to halt its cryptocurrency project in the name of safeguarding Federal Reserves, foreseeing that it could be a real threat. Elsewhere, the Governments across the globe including DMs (US, France, and UK) and EMs (India), have criticized that has parked aside the launch of the crypto coin.

As per renowned crypto veteran Danny Master, the Chairman of cryptocurrency custody platforms, Coinshares Group, stated this is worse than the financial crisis of 2008. He tweeted, “Today we’re in uncharted territory with central banks & negative interest rates – arguably more so than post ’08 financial crisis. This means policymakers are leaving fewer tools to fight the next downturn that inevitably will occur. Investor psychology is notoriously fickle.”

In conjunction with that, for safe-haven sentiment, one could actually expect other traditional safe-haven asset classes such as gold, JPY or CHF – trios seem to be struggling for their stability quite often in the recent past. As a result, investor class in the dynamic finance arena is ultimately cognizant about Bitcoin and other crypto peers in the same light as a potential safe haven role during the economic crisis, contemplating the very essence/need for the invention of cryptocurrency during 2008. Having mentioned that, we are neither inclined nor prone to this space, only time should decide whether it would be a boon or boom for crypto-industry in the next decade. But on a concluding note, wish to add a famous quote by Warren Buffet, wise to be fearful when the entire world is greedy, and vice versa.