It was the sharpest on-year employment decline since February 1999.

Inflation or deflation – which would be worse right now? 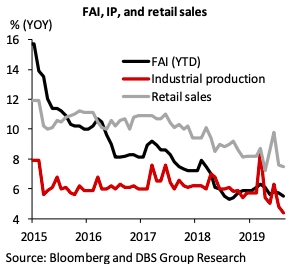 Demand for credit was lacklustre amid rising uncertainty. Growth in total social financing remained flat at 10.7 percent in August, while loan growth retreated by 0.2pp to 12.4 percent. The impact of targeted policy easing has so far been limited.

Since early 2018, PBoC has injected more than RMB3.6 trillion in net liquidity through seven reserve cuts. However, financing costs for the real economy has failed to decline. The weighted average lending rates have remained broadly unchanged in the past three quarters (5.66 percent for Q2 2019; 5.69 percent for Q1 2019; 5.64 percent for Q4 2018). M2 stayed historically low, albeit edging up 0.1pp to 8.2 percent in August.

"We expect Beijing to strive to put a floor under the economy. A rate above 6 percent in 2019 and 2020 would be needed to double 2010 GDP by next year. We expect PBoC to lower RRR by another 50-100bps in Q4. Property, however, will unlikely be used as a short-term means of stimulating the economy given the still-elevated home prices," the report further commented.