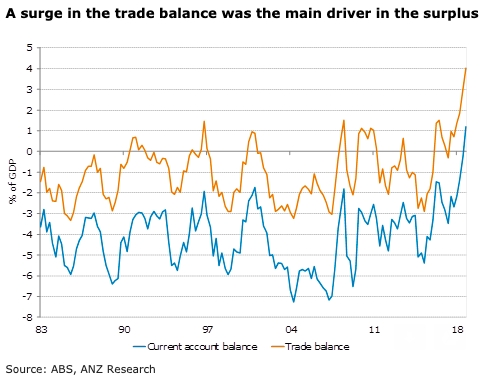 Australia’s current account was in surplus in Q2, improving upon the revised AUD1.1bn (previously AUD2.9bn) deficit in Q1. The trade balance increasing to AUD19.9bn from AUD14.8bn was the main driver of this surplus. The fall in the income deficit added to the size of this surplus by decreasing from AUD15.5bn to AUD13.9bn this quarter, ANZ Research reported.

Import volumes fell 1.3 percent q/q reflecting declines across most categories. The biggest decline was from consumption goods, which fell 2.9 percent q/q. The decline in consumption goods was driven by household electrical items falling 6.1 percent and car imports declining 10.6 percent for the quarter.

The terms of trade rose by 1.5 percent q/q, reflecting a large rise in export prices (+2.5 percent) and an increase in import prices (1.0 percent).

"We anticipate further solid trade surpluses going forward, but Q3 looks likely to be a little lower given the fall in commodity prices. The net exports contribution to GDP growth was also stronger than the market expected. Given the weakness seen in other parts of the economy, continued strength in trade will be important for GDP going forward," the report further commented.