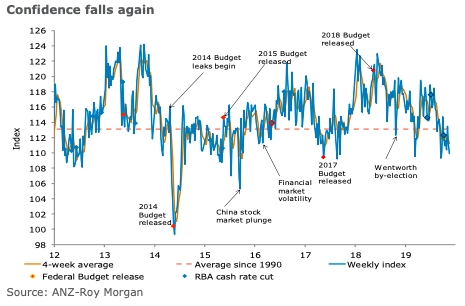 The four-week moving average of inflation expectations declined by 0.1ppt to 3.9 percent as the weekly reading fell to 3.8 percent, its lowest level since the end of June.

"Confidence faltered again due to weakness in the two economic conditions sub-indices. Continued weakness in these sub-indices has caused poor performance of the index for some time. Labour market data last week revealed that the job market weakened last month, which is probably the reason why the economic conditions sub-indices have been down for the last few weeks. Confirmation that wages are still subdued may also have made households apprehensive about the economic outlook, even if it doesn’t seem to be impacting them directly via financial conditions. Renewed weakness in the weekly reading of inflation expectations will be a concern for the RBA," said David Plank, ANZ’s Head of Australian Economics.