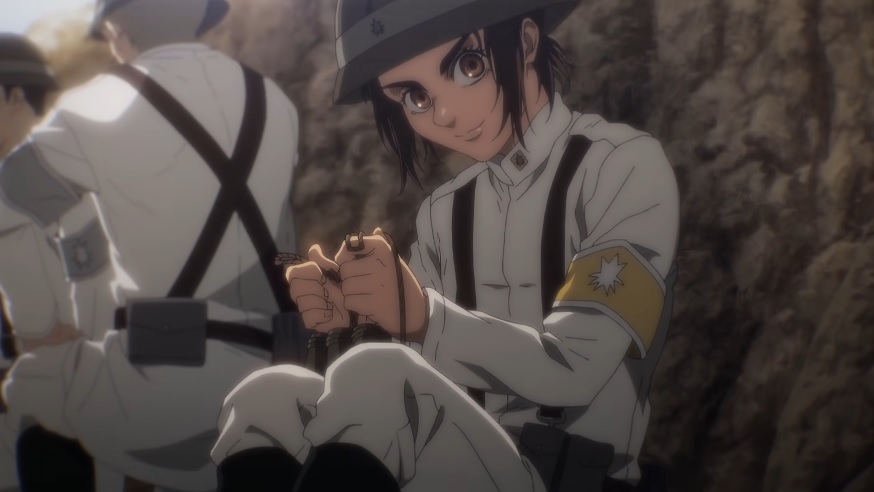 The wait for “Attack on Titan” season 4 has now winded down to just a few days, and more information about episode 1 has been revealed. A recent update confirmed the new season will open by focusing on a new location and unfamiliar faces.

‘Attack on Titan’ season 4 episode 1 spoilers: Here’s what to expect

The season 3 finale has given fans a brief sneak peek of what will happen in the early parts of “Attack on Titan” season 4. Similar scenes were shown in the only season 4 trailer ever released along with a preview of some of the new characters and Titan forms that fans will be seeing in the new installment.

Attack on Titan The Final Season

Episode 1 Title: 海の向こう側 (The Other Side of the Ocean) pic.twitter.com/ziUN1bcMzz

Now, it has been confirmed that “Attack on Titan” season 4 episode 1 is titled “The Other Side of the Ocean.” The first chapter of the manga’s 23rd volume has the same title and it revolved around a crucial battle between Marleyan and Mid-East Allied forces. The latter is under siege, particularly its stronghold Fort Slava, where its fleet is currently stationed. Marley will essentially win the war once they take over Fort Slava, and they can proceed to their next order of business -- acquiring the Founding Titan.

Fans should look forward to seeing new characters in “Attack on Titan” season 4 episode 1. Based on the same chapter, some of the central characters in the upcoming episodes are young soldiers. This episode is also a good chance for anime-only fans to get an idea of how well-versed Marley is when it comes to navigating wars against other people.

Also, just like Paradis, Marley has a pool of brave and intelligent young soldiers. Due to their long-running Warrior program, Marley has more humans who turn into Titans, some of which will debut in “Attack on Titan” season 4 episode 1 as well. Therefore, it should also establish what kind of threat awaits Eren and his comrades in the final season.

‘Attack on Titan’ season 4 episode 1 release date, where to watch

“Attack on Titan” season 4 episode 1 will premiere in Japan on Monday, Dec. 7. Luckily, it has been announced that simulcast and delayed broadcast of the weekly episodes will be available through the biggest streaming platforms available around the world.

Fans should also note that “Attack on Titan” chapter 135, which marks the start of the war against Eren, will be released on Dec. 9. That means leaked spoilers are likely to emerge online on the same day “Attack on Titan” season 4 premieres.