What just happened to our tax? Here's an explanation you'll understand

With all the announcements on tax over the past few days it’s hard to keep track. So here goes.

A year ago the then treasurer Scott Morrison unveiled a “seven year personal tax”.

Some of it involved tax cuts way out into the future, in 2022 and 2024, with which we needn’t concern ourselves – there’ll be two, maybe more, elections before then.

The bit that was to start in mid 2018 (and did) wasn’t a tax cut at all, strictly speaking. It was an “offset” with an ungainly name: LMITO – the Low and Middle Income Tax Offset.

A standard tax cut, applying to any rate, would save money to all taxpayers on that rate and rates above it, including those on very high incomes. It couldn’t be directed to just low and middle earners, which is what the Coalition wanted.

So the Coalition designed an offset, to be paid as a lump sum after the end of each tax year, after returns had been submitted and only to those taxpayers whose returns showed they weren’t high earners.

(Taxpayers earning more than $125,333 wouldn’t go home completely empty handed - they would benefit from an increase in the point at which the the second highest rate came in, worth a barely consequential $135 a year.)

It was ungainly – it was better described as a series of annual lump some payments than a tax cut – and Labor embraced it entirely.

And these things stayed, for almost a year, except that it was all a bit academic.

Labor wasn’t in government, and the leglislated offsets weren’t to put the lump sums in pockets until after the end of June 2019.

In 2019 the Coalition trumped Labor

It allowed the Coalition to sneak in before them in Tuesday’s budget and double the maximum lump sum: $538 became $1,080, a promise Bill Shorten matched in his budget reply speech on Thursday night.

But for some reason the Coalition didn’t double everything: $200 only became $255, rather than the $350 Labor had already promised.

Now Labor has trumped the Coalition

Shorten says it’ll cost an extra $1 billion, which is a mere fraction of the money Labor believes it will have that the Coalition won’t, because of its crackdowns on negative gearing, capital gains tax concessions and dividend imputation.

As Shorten put it on Thursday night:

In fact they’ll pay just as much tax from payday to payday, but they’ll get back more at the end of the year, in most cases $95 more.

So here’s the scorecard: 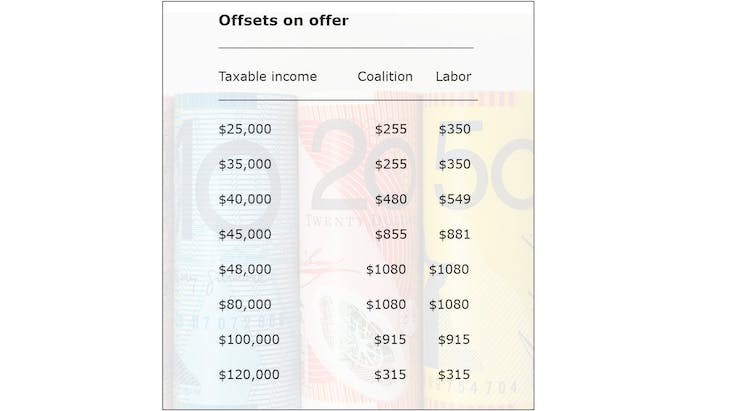