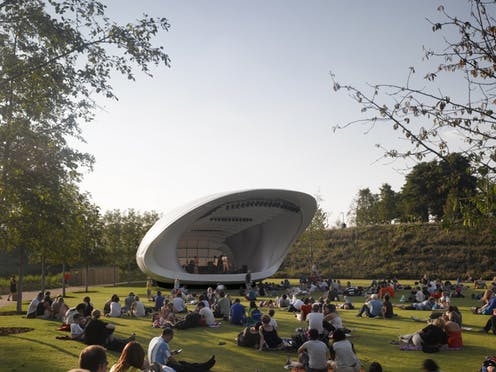 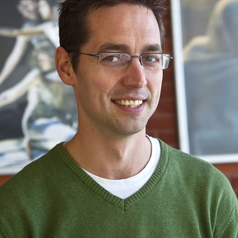 Theatre is a dynamic art form that combines bodies, light, sound and materials into exciting live events. But while each show – whether it’s a play, concert, dance, or something else – is unique, they are always conditioned by the spaces and places in which they are made and performed.

The theatres many of us go to to watch live shows are still shaped by past traditions. In the UK, the horseshoe-shaped auditoriums and picture frame stages come from the stage-auditorium relationship that developed at the end of the 16th century in Italy. These theatres are well equipped for elaborate spectacles like musicals and opera, allowing spectators arranged in multiple layers – reflecting class differences – to gaze at another world constructed for them on the stage.

The dark interiors of black box studios – which are multi-purpose theatres common in many post-war UK arts centres, as well as in schools and universities – reflect the desire of 20th century theatre-makers for more flexible, experimental spaces. Popular since the 1960s, these studio spaces seem to cut performances off from the social world outside and enable more abstract and unconventional styles.

Now, theatres are changing once more. Shaped by local social contexts, greater ecological awareness and the mixing of different art forms, performance spaces are becoming increasingly diverse. Modern theatres are much more connected with their surroundings – and so too are the performances they stage.

Spaces of connection and interaction

The four winners of the Performance Space Design award at the recent 2019 Prague Quadrennial of Performance Design and Space – an exhibition and arts festival that features the best of design for performance from around the globe – are great examples of how the design of theatre and performance space is changing. Each shows how theatre spaces are evolving in ways that open up new possibilities for connection and interaction. This might be between performers and spectators, spectators and other spectators, or performance events and their social, cultural and environmental contexts.

Two of the winners, the Levitating Theatre (from Poland) and Theatre in the Wild (Hong Kong), are outdoor theatres. The Levitating Theatre is a small-scale, playful performance space that is both stage and outdoor dining table. The theatre is sensitive to the surrounding environment – the platform flows between two trees – and embodies a sense of experiment. Here performance might be a feast for all the senses. 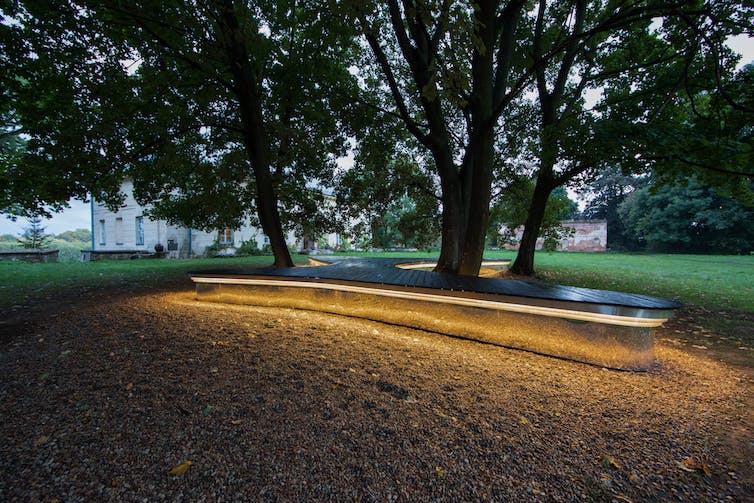 Theatre in the Wild meanwhile is a temporary construction, made out of reclaimed and recyclable materials. The staging area responds to the surrounding environment when the wind moves it and shadows from nearby banana trees play across it. Located in a rural landscape – in the village of Ping Che in the North District – which is threatened by urban development, it is more than simply a place to watch a show. It draws attention to the struggles of local people and creates a space where art and nature are in dialogue – and where residents, invited artists and visitors from the city can meet. 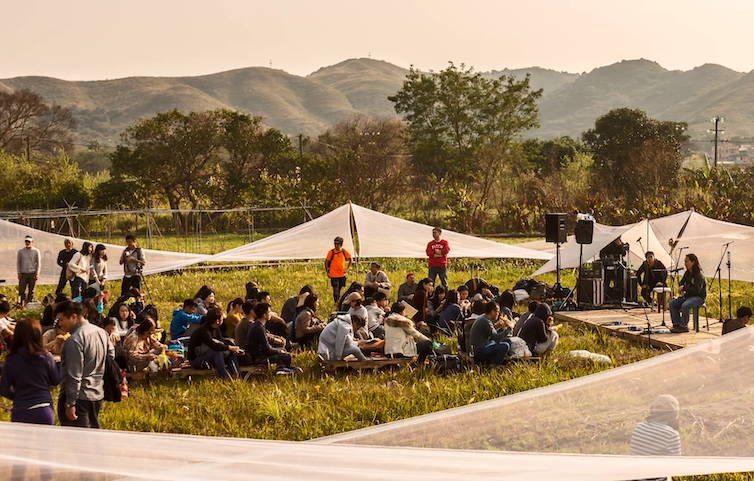 The visually striking mobile concert platform Soundforms (from the UK) brings the acoustic qualities of an indoor concert hall to outdoor public spaces. Soundforms is shaped like a large white shell lined with rows of acoustic panels. It differs from other outdoor concert platforms – like California’s iconic Hollywood Bowl – because it can be moved to different places and musicians don’t need to rely on electric amplification to be heard clearly.

And finally, the minimalist multi-purpose auditorium Dox+ in the Czech Republic has revolving ceiling panels that enable it to be acoustically tuned to the needs of spoken-word or musical performances. Its light-coloured concrete walls and floor give it a strong architectural presence and identity. The walls are also visible during performances, so the audience is always aware of where they are, and the here-and-now reality of the event.

Other examples from the Quadrennial, such as The Living Stage (New York) and Punctum’s Public Cooling House (Melbourne), were created in response to community and ecological concerns. The Living Stage transformed a park in New York into a space of communal interaction and celebration. Recycled materials and plants were used to create a performance space for a play created by local primary school children and elderly residents. The Public Cooling House meanwhile is a temporary wooden building that the public can enter and experience different cooling acts performed by attendants. With their feet immersed in water, and a damp cloth placed gently on their foreheads, they can reflect on the importance of water in our rapidly warming world.

Part of the event

The most interesting new theatre and performances spaces are those that serve as integral parts of performance events rather than as mere containers for them. Theatre and performance makers have increasingly explored sites, places and locations beyond traditional theatre buildings where their work can engage audiences in new ways. Former industrial sites, town halls and places of worship have all been adapted to serve as places for performance. The use of these spaces connects us to the past as we contemplate the present and our possible futures.

For centuries, theatres have served as locations where people gather to share in the excitement of live performance and reflect on what it means to be human. As they continue to evolve in response to pressing social, political and environmental issues that concern our shared humanity, theatres are opening up new possibilities for connection and interaction which remind spectators that we are never separate from the scenes we witness, whether in performance or in everyday life.