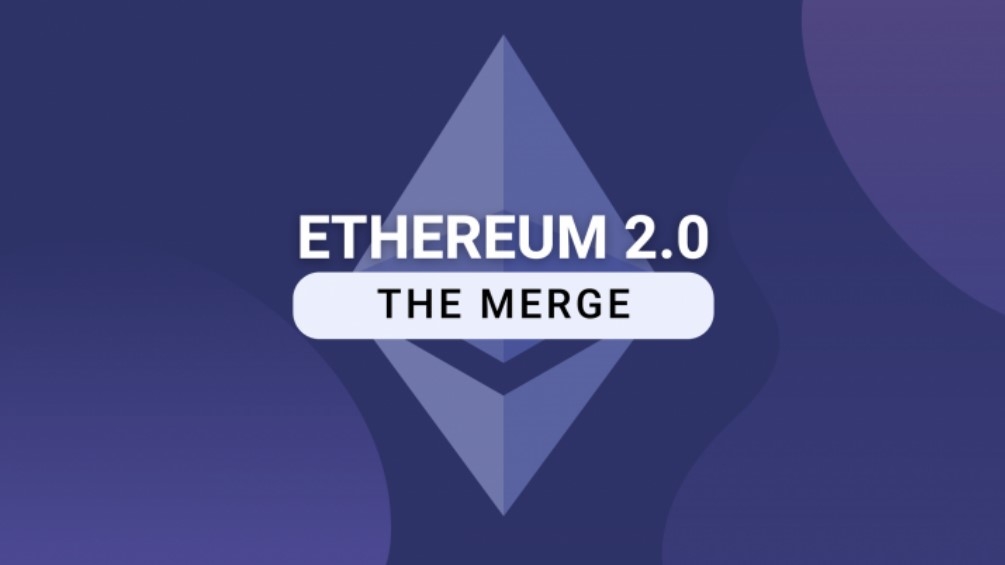 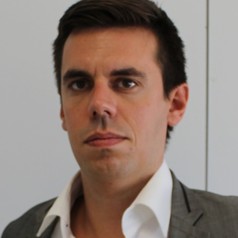 Cryptocurrencies might still be a very long way from their highs of 2021, but some of the major ones have staged some decent recoveries in the past couple of months. Notably ether (ETH), the second largest cryptocurrency after bitcoin, is trading at almost US$1,700 (£1,463) at the time of writing, having dropped as low as US$876 in mid-June.

Ether, which was created by Canadian/Russian programmer Vitalik Buterin, is the cryptocurrency used for transactions on Ethereum, the leading platform on which developers can applications using blockchain technology.

Blockchains are online ledgers that run without been controlled by any single company. Much of these applications revolve around smart contracts, which are automated contracts that remove the need for intermediaries such as lawyers and are seen as having huge potential for the future. 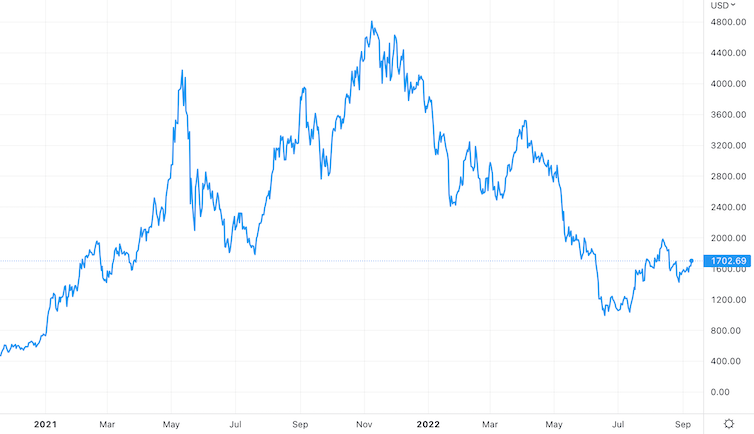 One of the main catalysts for ether’s rebound has been the Ethereum merge, a huge project to change the way the underlying blockchain operates. Where transactions on Ethereum are currently validated using an energy-intensive system known as proof-of-work (PoW), in which lots of very powerful computers compete to solve complex mathematical puzzles, from around September 15 it will shift to a new system known as proof of stake (PoS).

PoS basically means that transactions on the blockchain will be validated not by all these computations but by a network of investors whose commitment is demonstrated by the fact that they own at least 32 ether (yours for about US$54,000).

The idea is that this gives them an economic incentive to enhance the security of the network, and are therefore very unlikely to try and sabotage it. Whereas bitcoin transactions all depend on PoW, lots of newer cryptocurrencies use PoS, including Ethereum rivals such as Solana and Cardano.

When the Ethereum merge takes place, power consumption on the blockchain will be reduced by 99%. Since it is currently the most used blockchain in terms of transactions, this will save a huge amount of electricity each year, corresponding to Chile’s power consumption.

As a result of the merge, some analysts expect ether to overtake bitcoin as the leading crypto in terms of the total value of all the coins (in crypto circles this is referred to as the “flippening”). Ether is currently worth just over US$204 billion, while bitcoin is worth US$396 billion. 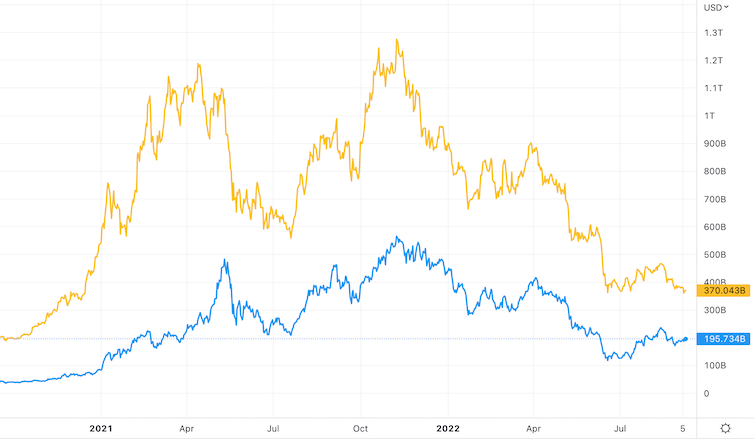 Until now, cryptocurrencies and bitcoin in particular have suffered from a bad reputation. Bitcoin was initially conceived with the egalitarian goal of allowing investors access to a financial system with no need for banks and with money that isn’t controlled by countries. It has been championed for its ability to enable billions of people without bank accounts to transact online, and to facilitate things like microfinance and ultra-cheap cross-border trading.

Yet bitcoin has come to be associated with environmental degradation and criminal activities. The mainstream media has endlessly linked the leading cryptocurrency – and by extension the whole space – with money laundering, online drug dealing, Ponzi schemes and exchange hacking.

Netflix documentaries have further reinforced this negative public image. Recent scandals in the crypto world, such as the fall of Ethereum rival Luna and the bankruptcy of Celsius and other crypto lenders, have not helped either.

One major consequence has been that major financial institutions like investment banks and pension funds have been cautious of ploughing money into this space, despite the leap forward in technology that blockchains represent.

But if the most widely adopted crypto platform successfully shifts to PoW in the coming days, many believe that this will overcome the biggest institutional objection and see much more money flowing into the space (there are already early signs, such as Fidelity’s new crypto fund for retail investors). This is likely to accelerate the global regulatory framework that would minimise undesirable activities.

By closing down the environmental objections to crypto, other advantages to ether are likely to come to the fore. The merge will offer a return to investors in the form of rewards in exchange for locking up their money for a period of time (“staking”).

Although you need to stake 32 ether to become one of the network’s validators, numerous companies have set up systems to enable smaller investors to pool their money so that they can participate. For example, Binance, the world’s largest crypto exchange, offers investors 6% annual percentage yield for pooled staking on ether.

Staking will therefore create a win-win situation with guaranteed returns and a very liquid system that makes it easy for people to move their money in and out of ether. This will further enhance the appeal of ether and PoS cryptos in general.

This could help to accentuate other positives around crypto, another of which is humanitarian donations. When Russia invaded Ukraine, for instance, the Ukrainian government called for donations in bitcoin and ether to support its efforts against invaders. This quickly attracted substantial amounts of money.

Tonga was similarly successful with a campaign after its volcanic eruption earlier this year. By being able to cross borders easily and cheaply, cryptocurrencies are the ideal vehicle for international donations.

All that said, it is uncertain how the Ethereum blockchain will function after the merge in terms of transaction speeds and costs. One major problem with Ethereum in the past has been that transactions have been ludicrously expensive, sometimes running to thousands of US dollars at peak times in 2021.

The developers of the Ethereum Foundation do not expect the merge to make a big difference in these respects (currently “gas” fees are averaging between US$1 and US$4 per transaction depending on which platform you are using). Much more important is likely to be another shift in ethereum’s journey to “Ethereum 2.0” known as sharding, which is due to happen in 2023.

We will also have to wait and see how smooth the merge is. Synchronisation and update bugs could see problems such as validators disconnected from the blockchain. Negative stories like these could see investors staying away for fear of instability.

But on the whole, while the merge will not be a miraculous event, it could help improve the image of cryptocurrencies and attract institutional and retail investors. At a time when sustainable investing is increasingly high priority, the ether merge and its attractive returns have the potential to put ether at the top of the list.

Jean-Philippe Serbera does not work for, consult, own shares in or receive funding from any company or organisation that would benefit from this article, and has disclosed no relevant affiliations beyond their academic appointment.