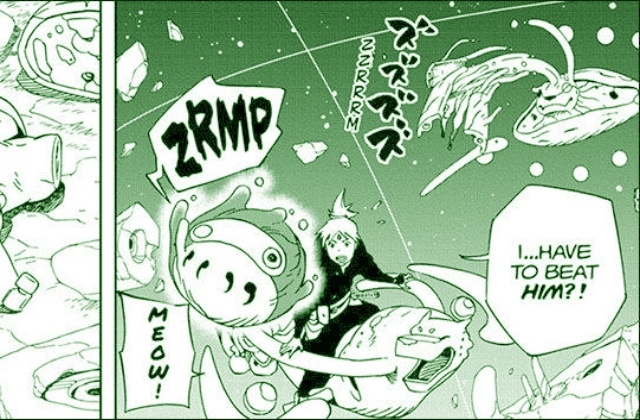 “Samurai 8” chapter 30 is coming, and it will focus on Kotsuga and his past. Surprisingly, Benkei has a big part in his life and what he became when he got older.

Last week’s chapter 29 was titled Yoshitsune’s Calling, and it showed Daruma reprimanding Benkei for his shameless acts, especially when he killed his sensei’s, Yoshisune’s wife. He ruined their family by setting up his sensei and then killing them all in the end.

When Daruma confronted Ben, he reasoned that he only did the act because he actually did them a favor by saving them from their destiny. Daruma reads Benkei’s memory, and this was how he found out about Yoshitsune and what Ben did to him and his family.

Daruma decided to finish off Benkei

With what he saw, Daruma decided to end Benkei’s evil ways by finishing him off. However, the continuation in “Samurai 8” chapter 30 showed that Ben would be able to escape, and Daruma failed to catch him as his time is up, but before he sleeps, he passed on Ben’s memory to Hachimaru, so he continued the chase on Benkei.

Unfortunately, Benkei unleashes a protective shield, so Hachi did not catch him. He went back to his group, and they strategize on how to deal with the enemy.

“Samurai 8” chapter 30 will be about Kotsuga, whose real name is Sanda, which was revealed through the flashback that showed his life. It turned out he is Yoshitsune’s son, and that makes him a member of the samurai family that has centuries of history as being samurais.

Kotsuga will learn that it was Benkei who killed his parents and effectively stripped the family of their status. Ben concealed his involvement in the unfortunate fate of his family and made him his servant. When he discovered this heatless deed, Mangaquirk shared that Kotsuga joined Hachi’s group and asked him for help to avenge his family.

“Samurai 8” chapter 30 will be out on Dec. 8 with the scan copies arriving earlier on Dec. 6, as per Otakukart. Fans can read the manga via the Shonen Jump or Manga Plus app for free.