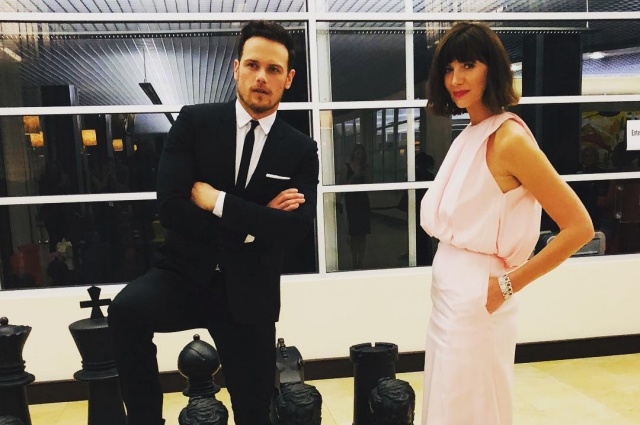 Sam Heughan and Caitriona Balfe dating rumors will probably stop now as it was reported that the actress recently married her long-time boyfriend. The two allegedly married in secret in England this past weekend.

Caitriona Balfe and her fiancee` Tony McGill was said to have walked down the aisle in an intimate Catholic ceremony in England. As per People, the wedding was very simple, and only close friends and family were invited.

The highly private affair was said to have been officiated by Rev. Fr. Louis Beasley-Suffolk and the couple received the sacrament of matrimony via the typical Roman Catholic wedding rites. Although it was not confirmed, the report stated that it is likely that Balfe’s “Outlander” co-stars including Sam Heughan, were also present to witness one of the most important days in her life.

On Aug. 12, Sam Heughan updated his Instagram with a photo of himself, and he was wearing a suit. Fans are suspecting that this was taken during Caitriona Balfe’s wedding because the actor also captioned the photo with a simple "Remarkable weekend" and there were emojis that suggest a big celebration.

In any case, now that Caitriona Balfe is married, her dating rumors with Sam Heughan will be nonsense now. Although they may still do many steamy scenes in their “Outlander” drama, there is no chance of them being romantically linked because the actress just proved that her heart only belongs to one man who is her husband now. Sam Heughan and Caitriona Balfe may remain close friends though, and their cute banter on social media may also continue, but that is just about it, there’s no more chance of romance.

Meanwhile, Balfe and Tony McGill started dating in 2015. Their relationship was very private that the media know very little of McGill. They got engaged last year, but it was not announced. It was revealed after Caitriona Balfe appeared in the red carpet of the Golden Globes wearing her diamond engagement ring. She later confirmed via interview that she and her boyfriend are planning to get married.