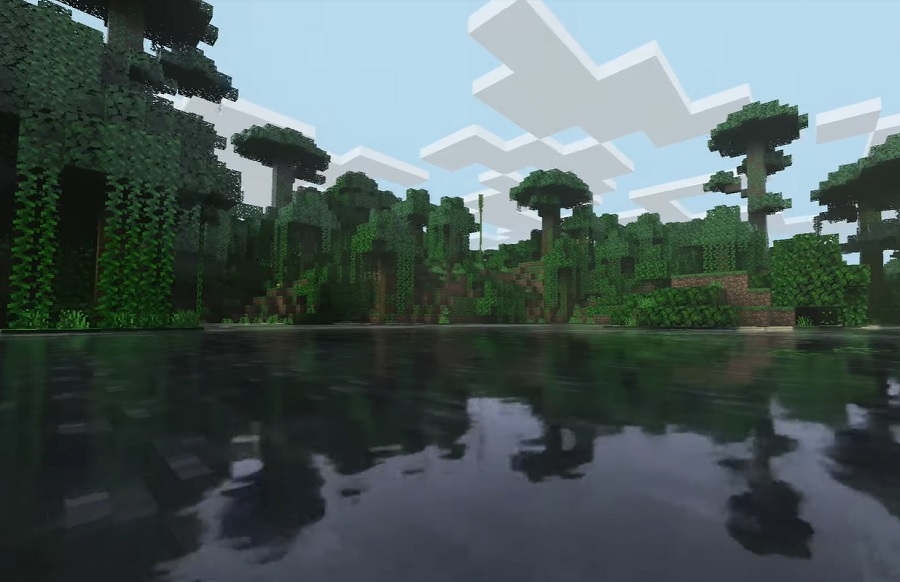 Reflection of the surroundings can be seen on a body of water in “Minecraft” with Nvidia RTX’s ray tracing tech. | Photo by NVIDIA GeForce/YouTube screenshot

Nvidia and “Minecraft” maker Mojang had exciting news for avid fans of the game during the 2019 Gamescom this week. Computers running with Nvidia’s GeForce RTX cards can experience the game with a major graphics revamp.

Some gaming fans might not be that familiar with ray tracing yet. But those who have been following reports about the next-generation consoles from Sony PlayStation and Xbox know that it is practically the next trend in the video game development industry. And it is wise for Nvidia to get ahead of that by collaborating with developers like Mojang.

In the general sense, ray tracing is a rendering technique in computer graphics where the path of light is utilized as a guide to trace the pixels of an image. This allows the rendered image to show visual effects from the objects that the light passes through in an image.

To simply put, ray tracing lets graphics designers and animators to produce highly realistic images whether in TV, movies and now in video games. So it only makes sense that Microsoft’s Mojang will partner with a company like Nvidia that specializes in designs and graphics processing units to apply this technological innovation to “Minecraft.”

Before trying out “Minecraft” with ray tracing support, fans can now watch a short preview on YouTube to see how these changes affect the overall visual appeal of the game. As mentioned, ray tracing support is mainly applied to achieve realism in computer graphics. And the short video shows that, with Nvidia RTX cards, they can experience that while playing “Minecraft.”

It is hard not to notice the improvements that Nvidia’s ray tracing support gives to “Minecraft.” Before this major update, outdoor sunlight only appears like a ball of light. But with the ray tracing, gaming fans will surely appreciate that “Minecraft” will soon have life-like lighting and shadows. Another very exciting improvement is the way the surroundings are reflecting on bodies of water instead of just seeing a flat surface in color blue.

For now, it is only confirmed that the ray-tracing support will be available to RTX-branded Nvidia cards such as 2060, 2070, 2080 and high-end GPUs under the Super and Ti series. Both companies have yet to decide when the update is going to be officially released.