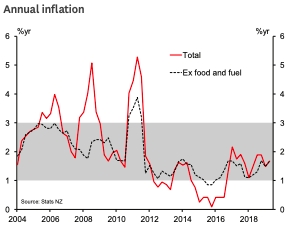 New Zealand’s consumer price index (CPI) for the second quarter of this year rose by 0.6 percent in the June quarter, in line with what market participants had anticipated. Almost half of the increase was due to short-term volatility in petrol prices, which were 5.8 percent higher on average over the quarter. Inflation pressures elsewhere remained modest.

The annual inflation rate picked up from 1.5 percent to 1.7 percent. Some of that was again due to higher fuel prices. But the various measures of core inflation also picked up a little, with most of them within a 1.5-1.7 percent range.

There is a consistent message coming through: inflation remains firmly within, but in the lower half of, the Reserve Bank’s 1-3 percent target range. A sustained move towards the 2 percent midpoint of the target would require stronger economic growth from here. That hasn’t been forthcoming; in fact, the domestic economy has been slowing and the global environment has become more uncertain.

The Reserve Bank had already judged that a lower OCR would likely be needed to meet its objectives, and today’s figures will do nothing to change that stance. While there was a 2.5 percent jump in prices for household contents in the June quarter, that was largely reversing an unusually steep fall in the March quarter.

Low global inflation and competitive pressures are continuing to hold down prices for imported goods. In contrast, non-tradables inflation has picked up in the last few years, albeit gradually. Non-tradables prices rose 0.3 percent in the June quarter, a relatively low number resulting from seasonal declines in domestic airfares, car rentals and accommodation. The annual inflation rate held steady at 2.8 percent.